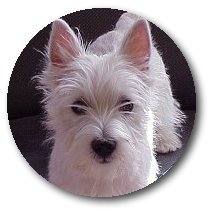 Twink was one of twelve Westies surrendered to Westie Rescue when a puppy mill in the Midwest was closed down in November ’99. She was only eight weeks old at the time and weighed a mere three lbs. She was a scrawny looking little Westie and she was not well. When she breathed she had a rattle in her chest, occasionally she had a nasal discharge and her breathing was labored. Her whole body moved every time she took a breath. She was immediately taken to a veterinarian and started on antibiotics. After a round of antibiotics, a complete blood workup, and no improvement, x-rays were taken and sent to a veterinary radiologist. It was determined that Twink was suffering from bacterial pneumonia. Her antibiotics were increased. After a month, follow-up x-rays were taken and they showed significant improvement. Twink’s “big dog in a little body” Westie spirit showed through even at her weakest moments.

Twink made numerous visits to her veterinarian, and even with a rescue discount her bills are significant. WestieMed has been an invaluable tool in her recovery. She has found a “forever” home with the foster family that has overseen her care. Twink spends her days with her Doberman friend who thinks Twink is her own personal doggie toy.

Just wanted to update you on my darling Twink and her medical journey. She came to me in Kentucky and has her forever home right here at my house. Twink came to me as a ten-week-old puppy with pneumonia. She has now seen four different veterinarians and has been on some type of antibiotic almost her whole life. She has never shown significant improvement. We finally went to an veterinary internal medicine specialist (why I didn’t do that sooner I’ll never know). We finally have a diagnosis. She has Kartagener’s Syndrome which is a birth defect caused by a recessive gene characterised by chronic pneumonia, chronic sinusitis, and internal organs being on the wrong side. All these things are because the cilia in the body don’t function as they should. Her treatment? She will be on low-dose antibiotics for her whole life and will need chest X-rays every three months to make sure once the pneumonia clears up that we catch it as soon as it returns and up the antibiotics. I also bought a nebulizer today and have an appointment with the vet to learn the correct way to nebulize Twink – this will need to be done daily.

I can’t help but think what would have happened to Twink had she not been acquired by Heartland Westie Rescue. This would be another one of those cases where someone would have purchased the cute little Westie in the pet shop window (and she is VERY CUTE!!). They would have paid lots of $$ and then spent many more on her treatment – some would have just put her to sleep. We have passed the $1,500 mark and that was just to get a diagnosis. I wanted to share this information with you in the hopes that it will help educate people on some of the reasons one should not buy a dog from a pet shop. Feel free to tell this story to anyone who is thinking about buying a pet shop puppy.

As for Twink and me – we are doing GREAT!!! She is a joy to have around and I wouldn’t trade her for the world!

Twink is doing just great!!! She had a little relapse of pneumonia about two months ago but her internist changed her antibiotic and it cleared right up. She will be on antibiotics her whole life so we have to monitor that and will have to make a change periodically. She still has her treatment with a nebulizer every evening which she hates but tolerates. We are working on the Open exercises for obedience and will show as soon as she is ready. She is also now the “Ruler of the Roost” telling the Doberman and the Golden exactly what to do and when to do it – and they listen!!!!

Twink had been pretty sick in May. She had a new kind of cell (eosinophilic [sp?]) that was in her lungs. We increased her nebulizing to three times daily, added a steroid inhaler three times daily, and increased the dose of her antibiotic. She really seemed to be improving – so much so that we actually did agility last Tuesday for the first time in several months. On Wednesday, a group of us get together and do obedience training at a local park. Twink and I went, and she did so well that I was planning on entering her in a trial in July. We all take the dogs for a long run in the park after we train and Twink is always the only small dog there with all the Goldens, Border Collies and Dobes. She enjoyed the run just like always. Thursday morning she woke up at 4:30 and was coughing with very shallow breathing. I took her to the emergency clinic. She hadn’t been there too long when she collapsed. They got her back and had her on oxygen but whenever they removed the oxygen she could not breathe on her own. I talked to her internist several times throughout the morning but there was nothing anyone could do since she was not able to breathe.

I’ve lost many dogs over the years – Twink was by far the most difficult to part with. My heart is empty without her…