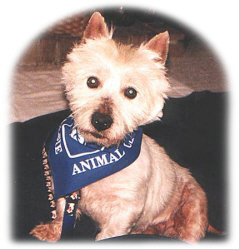 Scamper was born and raised on a Michigan farm. He and his siblings grew up in an outdoor “barn/kennel” and have never known the inside of a house. Recently his owner became sick and was unable to give them even the basic care that was given before. A local Clinic took in Scamper and three others (one Cairn and three Westies).

The original owner thought that Scamper had allergies and had been treating him that way; however, the Clinic discovered that he had mange. As a result of this, he had lost almost all of his hair.

The original Scamper was at the clinic for over a month while his mange was being treated, and while there, he was neutered, received all of his shots, and received all other necessary care.

Scamper’s sister, Katie (who was at the same clinic), found a home quickly. But the clinic was finding that Scamper was hard to place – either because he simply was not very pretty (even though his hair was coming in nicely), or no one wanted to pay his accumulting vet bills. So, WESTIEMED was called upon, and provided funds to help with Scamper’s vet bills. Soon after, Scamper (as well as his brother, Scooter) were released to Westie Rescue.

Scamper thrived in his foster home and was fully housebroken immediately (very smart boy!). Although shy around people until having the chance to warm up to them, he loves to play, and his Westietude is emerging more and more each day.

Scamper went to his forever home in a very short time. His new family came to meet him and were greeted by a very “insecure” little boy who barked and growled. But they sat down on the floor and talked to him and gave him treats. His family also met his brother and were charmed by him but they chose Scamper because “he needs us more”. Scamper now has a new little Westie brother who admires and adores him. He is growing more confident every day.

When we got Scamp, we had just lost our six year old Angus due to a really freakish situation that came from my giving him a large cooked soup bone. I tell that story often even though it’s painful because I find there’s a lot of people who are as uninformed as we were on the dangers of giving dogs bones.

Scamps physical health has been excellent. But in the beginning, I was quite paranoid and I noticed that he drank copious amounts of water. Beth assured me that it often happened with rescues but I needed to be sure so our vet did a lot of testing and really found nothing, except that his urine was too concentrated when we regulated the amount of water we gave him. I just let it drop. He tapered off on his water consumption after maybe a year, but he still drinks more than normal. He had a check-up about three weeks ago and he lost about 4 or 5 pounds from his previous visit – about a year – but he was a bit chunky then so I’m not worried. Beth had wanted him to gain more since he’d probably been deprived before and he went up to about twenty-three pounds and is now about 18.

He still has some behavior problems. He’s so much better than he was: he was very insecure around strangers and would often growl. He would really snarl when we picked him up and we wondered about him pain but he was selective enough (no growling when HE wanted to get somewhere) that I think he had been dropped or squeezed.

That said, we love him dearly. He’s traveled with us frequently and is usually very good. He has a Westie brother named McDuff and they have a pretty typical sibling relationship. Scamp is cuddly – on his terms – and quite affectionate. When you consider what he’s been through, he’s pretty remarkable. The groomer says he has a gorgeous coat and after only 3 trips to the groomer does quite well. He hates having his nails done so we usually do it.

I know I probably gave you more info than you wanted. Thank you for the work you do. We spread the word about Westie Rescue far and wide.