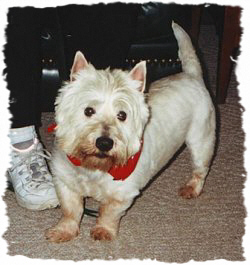 Scooter came from the same farm and conditions as Scamper did. However, he didn’t lose much hair at all before the mange was stopped. So his coat looks quite good except for some brown staining which should grow out. He is healthy….maybe a little too healthy since the vet wants him to lose a couple of pounds! He was the dominant dog of the pack and took his job seriously. That is causing him a bit of a problem now, but he is adjusting to a human pack.

Scooter finally went to his “forever” home. Because he has a tendency to be overprotective of his home and family, he was placed with a single lady who doesn’t have a lot of traffic in and out of her home. Scooter has learned that it is ok for people to visit and he seems to understand that it is no longer his “job” to protect. She knows that she should introduce Scooter to guests and to let him see her greet them before allowing him to greet them. Now Scooter greets with a wagging tail! Scooter also has a Westie brother and seems to be adjusting to his new life very well.

Scooter is living happily with two other rescued westies and is my best buddy. Since he never really had any toys before he was rescued, he just loves to play with them. As you can see in the attached photos, he falls asleep playing all the time. Scooter has also discovered that he is really not a land lover, but prefers the water which has earned him the nickname “Aqua Dog.” He just loves to swim and I think he would live as a duck if he could!! He is a healthy, wonderful westie who couldn’t be any sweeter then he already is. He has come to trust people and although he really does not like to be held, he will allow you to cuddle him. He has come so far in a couple of years and I am so thankful that he came into my life.

Thanks to all of you at WestieMed since I know I would not have my Scooter without all that you do!