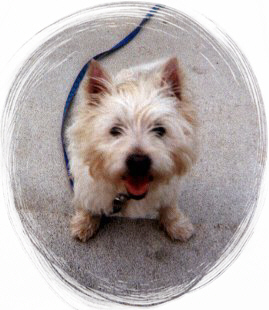 I took Clovis into foster care on April 22, 2000. Prior to coming to me, he had been in several ‘temporary homes’ in a very short time span. So, he was feeling very insecure. Disoriented and scared, he endured the long ride home snarling and crying. Looking back, I’m not too sure who was more scared – Clovis or me!

Once home, I thought the best way to help Clovis feel more secure was to get him used to his surroundings and into the ‘routine’ of things as soon as possible. Unfortunately, things did not go as smoothly as I had hoped. As those long hours turned into days, it became very apparent that Clovis was suffering from more than just the stress and anxiety associated with his recent change in homes — he had some serious medical problems!

Within a day, I observed increased problems with his skin, the hot spot on his tail, and the ear infections — All of which were already being treated. In addition, he was drinking water excessively, gorging his food, vomiting, had gas & bloating, diarrhea, was dripping urine, had difficulty defecating, sensitivity to the back and tail, and was limping. As the symptoms worsened and his back & leg pain became more prominent, I knew this little guy required some immediate medical attention.

A visit to the veterinarian, with a thorough examination and x-rays, revealed that Clovis was suffering from many ailments. He had severe arthritis and some damaged ligaments — The result of injury/trauma to the back legs, hips and spine many years prior. Since the injury went untreated, Clovis had compensated for the pain by manipulating his spine (he often stood in the shape of a C), and shifting his weight to one side. The manipulation had also caused muscle loss in his left hind leg, which he would hold up or drag at times. Unfortunately, surgery was not a feasible option at that point in time – only long-term maintenance for the pain. The exam further revealed that Clovis was around 10 years old (not 6 or 7 as originally thought), and he had cataracts which had caused some vision loss. As if that wasn’t enough, he also had acute atopic dermatitis, epidermal dysplasia on his belly, legs and throughout his back, and yeast infections in both ears. Although blood tests were required to confirm a diagnosis, the vet believed the urine dripping was possibly related to an infection, and the excessive water drinking was indicative of diabetes or something more serious. Fortunately, those tests confirmed no infection, diabetes or serious diseases! So, this lead the vet to believe that the excessive water drinking and food gorging/vomiting was stress related, and he hoped those symptoms would disappear as Clovis became more comfortable in his surroundings.

Needless to say, all that news was quite overwhelming, as well as the cost of the medication and veterinarian bills incurred. And, Clovis would require further follow-up visits and blood tests to make sure he was responding to the treatments.

Even though I was able to give Clovis the love, attention and care needed to help him heal, I was not in a position to personally cover his overwhelming medical expenses. Fortunately, WESTIEMED stepped in and covered most of Clovis’ medical expenses — giving him a second chance at a healthier and happier life, and adoption!

Since that first visit, Clovis has had several follow-up exams and tests, as well as an emergency visit for an aggravated old head/neck injury. However, I am happy to report that he is doing remarkably well! He is very happy, and he is looking and feeling better each and every day! Although, he will require a life-long maintenance program for his arthritis and allergies, all of his other symptoms have either disappeared or they are currently under control with a good diet and medication.

Thanks to WESTIEMED, and a lot of TLC, Clovis was able to receive the necessary treatment to help him heal, adjust to a pain maintenance program, and have a chance to live out his golden years happy, healthy, and as ‘pain free’ as possible.

Editor’s note: We are happy to report that Clovis’s wonderful foster Mom in Richmond, Virginia, is adopting him and making him a permanent part of her family. Clovis is one lucky boy!

It has been six months since Clovis joined the family, and I am happy to report that he is thriving and adjusting to his new home, surroundings, and sister Chloe (a seven year old Westie) remarkably well! While the road to recovery has been long and bumpy, Clovis has made tremendous progress both medically and socially.

Clovis’ skin has completely healed, and his coat has finally grown out. In fact, he just got his first “Westie Cut” and looks marvelous! We continue to battle the perpetual ear infection, yet we are making progress. With persistence, the vet believes that we will beat this too! Unfortunately, there is no “fix” for Clovis’ past injuries and the arthritis he suffers with. However, the long walks, daily exercise, massages (his favorite part), and playing with Chloe help to keep him limber and on all four paws! He has not had any arthritis medicine for over 3 months – now that’s great news!

Equally gratifying to watching Clovis heal medically has been watching his social skills change and a new personality evolve. He has learned how to play instead of being a bully, and often shares his toys and food with Chloe. He is not as gracious with his treats — they remain under close surveillance and guarded until every morsel is consumed. Clovis says that he has to “draw the bone” on some things. Even though he continues to struggle with some jealousy – he would be most happy as the only Westie in the family – he is learning that there is enough love and affection to go around!

When everyone says that Clovis is lucky to have found me, I always reply that I am lucky to have found Clovis! He is a very special Westie, and I am grateful to have him in my life every day! Thanks to WestieMed, and all of the other people who have been instrumental in Clovis’ healing!

Clovis could have ended up in another ‘good home’ – One that also provides shelter, nourishment, love, affection, exercise and medical care…but, I like to think that Clovis found the ‘perfect home’ when he came to stay with me and his big sister Chloe.

It has been over two years since Clovis first touched our hearts, and I’m happy to report that he continues to thrive and brings joy to our lives every day. We can’t imagine not having him around!

Today, Clovis is a well-adjusted and happy little man. However, every day continues to be a challenge as I battle his perpetual ear and skin infections, as well as arthritis from his prior injuries. I’m thankful for the times when things are ‘under control’ and when they aren’t…well, I just deal with it. Clovis makes it easy to care for him — He’s very accepting of the grueling routine. Even with very little hearing and sight capability left, Clovis continues to enjoy life like most Westies…playing with his sister, taking long walks, chewing the mail, protecting his food & biscuits, barking at trucks and digging!

I know that Clovis will require ongoing medical care for the rest of his life, but I remain forever grateful to WestieMed for their assistance in helping Clovis with the initial veterinarian care/treatment to get his problems under control. With WestieMed’s assistance, the initial medical care that Clovis received was instrumental in helping to make his ongoing medical maintenance needs more manageable today. Thanks again WestieMed!

It is with great sadness I report that Clovis went to Rainbow Bridge on January 21, 2003. In late November, Clovis began coughing and it was determined that he had a collapsed esophagus and bronchitis. Soon after, the bronchitis turned to pneumonia. Since his heart and lungs were strong, we were optimistic that he could beat the pneumonia with antibiotics and we would be able to treat the collapsed esophagus with long-term maintenance. In the weeks that followed, Clovis’ health deteriorated but he never lost his true spirit and will — He was a fighter to the end.

While Clovis’ time with me was short, he gave me a lifetime’s worth of love, joy, laughter and so many wonderful memories that will live on forever.

FOREVER IN MY HEART-