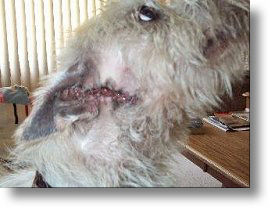 Bogey is a two year old, fifteen pound, male Westie that we received on July 3, 2000. He was supposed to be a stud dog in a puppy mill, when the breeder decided that he was not needed and released him to us.

When we received Bogey, his paws were splayed from standing on wire and he had a hole all the way through his left front paw. But, more seriously, he had a raging ear infection that had completely closed his ear canals. We were not even able to get medicine down his ears to treat the infection and there was no way to perform a limited surgery to open those ear canals. So, we decided to go forward with ear resections. An ear resection is the removal of the cartilage in the ear that is closing the ear canal.

When our vet performed the ear resections, he found that the infection had caused the ear canals and the ear drums to rupture. Can you imagine how much torment this little guy must have suffered?

The ear resections were completely successful. After two weeks of twice daily cleanings and strong antibiodics, the infection is gone. Bogey is feeling good and his hearing has been restored.

Bogey is going home to his new family tonight. They are so excited! A few months ago they lost their first little rescue Westie, DeeDee, to kidney failure. Bogey won’t be able to replace DeeDee, but he will make his own mark on their family. He has turned into a happy, healthy little Westie — and he has escaped the horrors of the puppy mill.

Thank you, WestieMed, for helping us turn this little guy’s life around.

We are the adoptive family for Bogey. In August, we will have had him two years. He is now a happy, healthy, active Westie. By the time we brought him home, Luann had him on a recovery mode from his ear surgery. We haven’t had any medical problems with him whatsoever. Bogey has been pretty smart and has been a family project to train. He is now able to: sit, stay, fetch, speak, dance, shake, and lay down on command. The biggest “quirk” is that you can’t turn him over on his back. He totally throws a fit and almost hyperventilates. –Maybe past left-overs from ear infections!!

We have three girls, so Bogey rarely goes without attention. He is spoiled rotten, but loved immensely. We needed him as much as he needed a home, as we had just lost a previous Westie to heart failure.

Thanks for the work you do–It does make a difference!

Thanks again, Marilyn B.