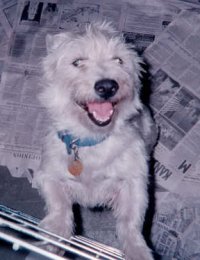 Maggie was the 15th dog that we rescued this year. She is approximately two and a half years old. We picked her up on June 1, 2000, from Akita Rescue in Kansas. Akita Rescue got Maggie from a backyard breeder. Although Maggie had been purchased as a breeding dog, she never had any puppies.

She was taken to the vet on June 2nd and vaccinations and preliminary vet work was done. She was scheduled to be spayed on June 6, 2000. When Maggie returned to the vet on the 6th, we discovered a large hernia. It was not an emergency surgery, but it was something that needed to be repaired and we chose to have the repair done at the same time as the spay, so Maggie would not have to undergo multiple surgeries.

Maggie came through the surgery well, but the additional surgery created a large surgical scar and a drain was necessary to aid in the healing. Maggie had to wear an Elizabethian collar for almost a week to protect the surgery site. She was also treated with a course of antibiotics.

Maggie has continued to progress well. She did develop an allergic reaction to the internal stitches and was placed on additional antibiotics to prevent infection. That problem has now cleared up. Her external stitches have been removed and every thing looks good for complete healing.

Thank you very much for this wonderful service that you provide.

Hi all! Maggie is doing wonderful! I adopted Maggie on June 11th, 2000. She has settled in very well to her new home and gets along with her Westie Brother, Winston. Maggie won her Junior Earthdog title from AKC on Labor Day Weekend in Roscoe, IL. We are in obedience classes and agility classes. She loves going to the nursing home with Winston to visit the residents there. She is a wonderful addition to my life! She is so sweet and I love her very much. Thank you for helping to fund her hernia surgery. Here are some updated pictures of her. One of the pictures is when we celebrated her 3rd birthday on 09/14/00 at my obedience club. You can see her Earthdog ribbons she won also in the picture.

Maggie is doing just wonderful. She just earned her AKC Senior Earthdog title on June 1, 2002. We are training in obedience and agility also. We have entered a few agility trials but the “zoomies” have gotten the best of her! I am thinking we might do better at indoor agility trials than ones held outdoors! I am planning to show in Obedience Novice B this fall.

Maggie participated in the West Highland White Terrier Club of America’s Parade of Rescues during their National Specialty in Oct. of 2001 in PA. It was an honor to participate in this event and we both enjoyed it.

Here is a picture of Me, Maggie on the day she earned her last qualifying leg towards her Senior Earthdog title and the Judge Liz Battista.

Thanks so much for all of Westie Med’s help with Maggie when she needed it.

Former Westie rescue, Maggie, my rescue girl earned her Master Earthdog title this past weekend in Iowa. In just three short years and 7 earthdog test weekends, Maggie has soared through the earthdog program! She earned her Junior Earthdog title just 3 months after I adopted her in September 2000! She earned her Senior Earthdog title in 2002 and we just started Master earthdog tests in June of 2003 and now has her ME title!! We really don’t train either, just work on whistle recalls that worked like a charm in Senior and we also used the whistle for the field work in Masters. The last two test weekends the field was tall grass, in September it was 4 feet tall, and this past weekend it was about 2 1/2 feet tall. Maggie just hopped right through those fields like the huntress she is!!!

Maggie will now receive the Versatile Westie Award the West Highland White Terrier Club of America gives out yearly!!! I am so proud of my little Maggie Mae!!!