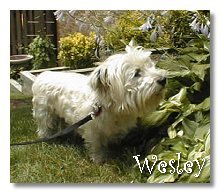 We received our lovable Westie, Wesley, on July 8, 2000. The Westie Rescue service said Wesley came from an abusive/neglectful home. He was suffering from severe lung problems and was never properly treated for a broken leg. Arthritis had set in to the legs and hip area. Most importantly, Wesley was hospitalized for pneumonia in February, but these effects were still plaguing him. He was put on antibiotics to help the lung infection but all efforts were failing.

Wesley was sent to a internal medicine specialist where it was determined that he was suffering from chronic bronchitis. The course of treatment included a trachael wash which would swipe his lungs and determine exactly what treatment needed to take place to stop the “crackling” and coughing from his chest. In October, Wesley was finally medically stable enough to have the trachael wash done, and was also neutered at the same time. The rescue service believes Wesley is around 10 years old but we know that he has many happy years ahead of him!

The tracheal wash determined his lungs were still severely infected and inflamed and he has been put on more aggressive antibiotics to rid him of this problem once and for all. Wesley has also been put on medication for his arthritis which couldn’t be done until they determined what was wrong with his lungs. We know Wesley feels like a new dog since he’s been with us these last three months but we hope this will help him feel even happier and healthier.

Wesley has fit right in with our family. He loves his sister, another Westie we bought before Wesley. Madison is three years old and they love to wrestle and chase each other around the house. He also takes a daily walk with her around our neighborhood. They’re best friends.

Wesley seemed very hesitant of people when he first came to us, especially of men. He often hid behind furniture so he could feel safe when he feel asleep but as the weeks went by he came out of his shell and made his presence known. His Westie personality is shining through! He loves to spend time outside just looking around the neighborhood and barking at squirrels and rabbits. He loves to give kisses (he didn’t know what they were when he first came to us). He may be an older dog but we have taught him new tricks! He watches Madison and imitates her tricks, after all he knows if he does it he gets one of his favorite treats.

Wesley is a joy to have. He is absolutely spoiled rotten and loving it! Thanks to WestieMed and Westie Rescue of Greater Washington, MD, his medical costs have been covered – and they have been pretty expensive.