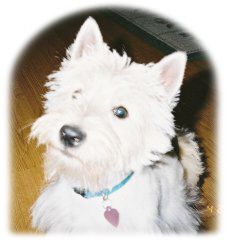 Conner was a three-month-old pet store reject when he was given to Westie Rescue of Missouri in December 2000.

Conner was consigned by his breeder to a pet store in Gladstone, Missouri. While Conner was at the pet store in November 2000, he developed a bladder control problem and was returned to the breeder.

The breeder couldn’t isolate the source of Conner’s problem, so she turned him over to Westie Rescue, thinking that Conner might require surgery which she couldn’t afford.

The vet examined Conner and advised that (1) he had a bladder infection; or (2) he was having control problems because he was so young; or (3) he had neurological damage and was not a good candidate for surgery.

Hoping for the best, Conner was started on a course of antibiodics and there was improvement. Although Conner still had some control problems, it was believed that the problems were associated with a bladder infection and his young age. He was not showing any signs of neurological damage.

With his rapid improvement, Westie Rescue felt comfortable placing Conner for adoption. Conner found a wonderful home with Bonnie and Doug in Tulsa, Oklahoma. Bonnie and Doug head the Scottie rescue efforts in Oklahoma and wanted to adopt a Westie rescue puppy.

Conner’s problems did not improve with age. Although he worked very hard at his housebreaking routines, he had only limited control and dribbled constantly. Bonnie had a specialist examine Conner and it was determined that he had an entopic ureter — a genetic problem in Westies. However, there was a possibility that his condition could be corrected with surgery. Initial estimates were that there was an 80% chance that surgery for Conner wouold be successful. Bonnie made arrangements to send Conner to California for this highly specialized surgery. The cost of the surgery was close to $2,000. WestieMed graciously offered their help. In the meantime, Conner was confined to wearing a diaper or a belly band to prevent his constant dribbling.

On May 28, 2001, Vicky, a rescue foster mom, flew with Conner out to the Cal-Davis Medical School in California. On Tuesday, May 29th, the reports began coming back and they were not good: Conner’s sphincter was below half strength; his kidneys could be involved; his bladder was grossly mishaped; he had a very unusual urinary tract; and the vets could find no evidence of a prostate. Additional tests and consultations were made on Wednesday, May 30th.

On Thursday, May 31st, the decision was made that there was no surgery that could help Conner. His condition could only deteriorate further. The doctors asked Bonnie and Doug to donate little Conner to the vet school in the hope that his passing would provide them with greater knowledge so that they might be able to help other dogs in the future.

Conner left us May 31st for his place on the Rainbow Bridge. All of us who knew and loved this wee little dog have lost a part of ourselves with his passing.

Conner was a puppy mill dog. Like his parents who are still in the mills, Conner was a victim of the greed that possesses millers to breed dogs without any consideration of the consequences. Every year puppy millers create hundreds of other babies who carry genetic defects. And rescue groups and loving families give their hearts and souls to these beautiful babies. . .fighting to keep them alive.

Until we stamp out the puppy mills — and the pet stores that keep them in business — we will continue to see more little Conners, more fights for survival, and more hearts are broken.