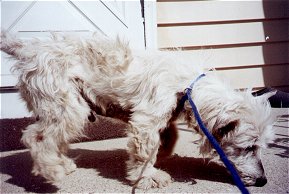 On the morning of May 5, 2001, I got a call from the director of the Islip Town Animal Shelter saying they had a Westie they thought I should take a look at. He was picked up as a stray and they thought he might be around five years old. I was told he was in pretty bad shape but I was not prepared for what awaited me. When they brought him to me in the director’s office my first thought was that this dog had been set on fire. His skin was blackened with raw, red patches, sores oozing yellow and fur falling off in clumps. His eyes were two pools of yellow pus and his ears were so infected and swollen they were closed, causing him to be deaf. He was extremely thin and weak. Not able to lift his head he would rest his nose on the floor. I did not think this dog could be saved. Then he slowly, painfully walked to me and wagged his tail ever so slightly. I scooped him up and brought him to my vet.

Dr. Pollack worked on Buddy for two hours, cleaning eyes, ears and taking tests. Buddy was found to have severe Malassezia which developed into a fungus. The infection in his eyes was due to dry eye and his deafness because of a raging yeast infection. The test showed Buddy’s white blood count was dangerously high and his blood proteins were very low. He weighed in at just fourteen pounds and couldn’t keep any food down. We were in a fight for Buddy’s life.

That first day I was sent home with Optimmune Cyclosporine ointment, Triple Antibiotic HC ointment, Synotic, Maleseb shampoo, Keflex, Atarax, and Ketoconazole. Buddy needed to be bathed daily and have his eyes and ears flushed. He was fed small amounts of food until he could eat without vomiting and then we just let him eat as much as he could hold. The vet said puppy food would be best as it was higher in calories and Buddy needed to gain weight.

Dr. Pollack saw Buddy approximately every ten days to do a complete blood workup. In the first two weeks he didn’t gain any weight and his blood count was worse. Then gradually Buddy began to respond to treatment. His eyes cleared up and his ears started to open. He was gaining weight and his hearing was slowly returning. His skin wasn’t so raw and had started to heal. But his blood work continued to worry us. Dr. Pollack ordered some x-rays and found his liver was slightly enlarged but everything looked okay.

We continued to give Buddy his daily baths and medication. He started to act more like a Westie, bouncing around the yard, barking at rabbits and investigating everything he could get his nose into. The next round of tests gave us good news. Buddy’s blood work finally came back normal. He was up to nineteen pounds and the fungus was nearly all gone.

On June 25, 2001, Dr. Pollack gave us the go-ahead to have Buddy neutered. His appointment is set for June 30. Once he is recovered from surgery, Buddy will be going to the forever home that has been patiently waiting for him.

Thank you WestieMed for your assistance with Buddy’s enormous medical bills!

Angus has been bathed twice this week. he gets his pills in a ball of liverwurst and loves it. He is a good eater and also likes the dog biscuit treats we got for him. He takes turns following Gene and me around the house. He sits in my gym and watches us work out every day and runs right over to be petted, whenever either of us stops to rest for a few seconds.

It is hard to believe that he has been with us for just one week today, for he has become a full-time member of our family, sitting on the couch with us or lying in bed with us and getting scratched or petted constantly. He does not kiss us yet, but we make up for it by kissing him. He is happy and full of life, wagging his tail at lightning speed, playing with the tennis balls that I bought him. He immediately decided that if we roll them to him he can roll them back with his nose, paw or mouth. If he uses his mouth, he does it by clicking his teeth together and it can be heard throughout the adult community we live in. Our grandchildren adore him and the youngest, Jacqueline, informed everyone that he is happy because “he loves her so much.”

We have told the folks in the village about his background and he is now pointed out and viewed as a hero, which, indeed he is, cheerfully coming through his horrendous past. He was truly blessed by Westie Rescue and his “nurse” Renee Savaria and my wife and me are now blessed with Angus. His new name hasn’t caught on with him yet, but I told him, this morning, that he and I share our Celtic heritage and that is why God gave him to us. Thank you all for filling our home with happiness.

Angus is healthy and extraordinarily happy, since the entire adult community where we live, Sunrise Village, love him, as well as our children and grandchildren. The grandchildren are more thrilled that Angus is coming to visit, than the fact that we are arriving at the same time. Our children have gotten dishes and food for him, at their homes. When we take him into the town of Sayville with us, he is surrounded by children and adults alike. It is difficult to get through the town with his fan club. When he meets new folks, we always tell them about Westie Rescue on line. However, his skin condition is constantly lurking in the background and will flare up at any moment. What surprises us is that it gets almost out of control within a few days, despite bathing, apple vinegar dips, and medication. We started to take him to our original veterinary but felt that they didn’t understand the urgency or severity of his allergies and so, we have returned to the Sayville vet. Everyone who has treated him there has been very caring and seem to be more knowledgeable about his condition. He is diagnosed with a dual problem. The first is the skin allergies to his environment, grass, etc., which we treat, along with his eyes and ears, on a daily basis. They feel we must get this controlled and then attack the virus, which they refer to as “elephant skin” or areas of dark, thick skin. We hope to get it all under control by the Fall. We love him and it is evident that he loves us and has made himself at home. By the way, he is incredibly well housebroken. He is just a good guy. Many thanks to you folks. By the way, he weighs 23 pounds and may have to lose a pound, to regain his svelte shape.