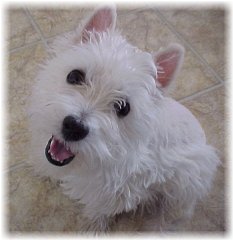 Goober was born on June 21, 2000, was brought to a vet’s office on August 4th, and stayed there until being released to me (his foster Mom) on November 15th, where he is in long-term foster care and being given lots of love and proper medical care.

Goober was born to a breeder in New Jersey who realized he had a medical problem at six weeks of age. The breeder asked his friend, a vet, to do a complete physical. At first it was thought that he had bloat, irritable bowel syndrome, and/or hypoglycemia. From the middle of August until the beginning of November, Goober was treated for irritable bowels (not knowing his problems had nothing to do with his bowels). Frustrated because Goober’s condition was not improving, the breeder turned Goober over to the vet’s office as he could no longer phyically care – or afford to care – for Goober. The staff at the vet’s office convinced the vet not to put Goober down, but rather to continue to treat him in an effort to save his life.

When he was four months old, the vet decided to have a small animal surgeon take a look at him, and it was determined that he has hemivertebrae, a condition which results from failure of a vertebral body to develop fully. Some dogs with this condition become totally paralyzed and is usually accompanied by compensatory changes in the shape of adjacent vertebrae. Disc spaces are preserved, although they may be misshapen and some ribs often appear crowded. If it is severe enough to cause clinical neurologic signs, surgery may be necessary.

Ultimately, the folks at WestieMed learned of Goober medical needs and his need for a “special” foster home to tend to his needs. WestieMed has kindly agreed to sponsor Goober and has made it possible for him to receive the best medical care for his condition. In order to determine the severity of his disorder, a myelogram or MRI must be performed, but the current specialist doesn’t want to perform the tests until Goober reaches at least ten months of age; it’s just too much of a risk at his young age.

Goober is now five months old and since being removed from the cage at the vet’s office, he has thrived in a loving home with two westie sisters and one brother (Maggie, Phoebe and Finnegan). Goober is not able to fully enjoy all fun puppy antics, but he does manage to fill his life with toys, shoelaces, and lots of TLC. Goober’s rear section doesn’t seem to work too well, but he doesn’t really know that. He is taking prednisone to help alleviate the pain associated with his condition.

When I picked up Goober, I was told he might have one day, one week or one month to live, no one could tell. I was told his condition is inoperable and nothing can be done for him, just bring him home and give him lots of love until it’s time for him to cross the Bridge.

Now we believe that Goober has a good chance of making it without a life of severe pain and total paralysis. We believe he will be one of the lucky ones to live with this condition and have a long and happy life. One look in his smiling eyes and we know we’ll do whatever it takes to keep him safe and happy.

Goober had an emergency myelogram and surgery today due to his condition worsening in the past several days. The compression in his spine turned out to be much worse than originally thought; however, it was operable! Goober’s prognosis is not known at this point, but it may be at least six months before he regains the use of his rear legs. In the meantime, he will need physical therapy and lots of medical care and attention.

DON’T CRY, MOMMY Don’t cry, Mommy, I’m okay! The Angels came, I couldn’t stay. God brought me home, He loves me, too! He said that I can Watch over you. I know you love me, I love you, too. That’s why I’ll do My best for you. That’s my new job, To wait for you Until you come, Here’s what I’ll do: I’ll run and romp, And play with glee! (I’ll lift my leg, When I have to pee!) But most of all, I’ll guard you well. I’m up here watching, Can’t you tell? Think of me, I’ll hear your voice. And know you made a perfect choice. You saved me once, I’ll not forget! You took care of me, But better yet: You loved me.
Jill P. Schlarb July 19, 2001

To let you know Goober made it thru another surgery fine. His knee cap is now located on his knee and held in place with two pins. He is now also neutered. I’ll call in the morning to see how he’s doing and might be able to bring him home tomorrow afternoon. Goober’s never been able to lift his head to look up while standing, lift a leg to “wet a bush” or even go up or down steps or stairs. One of these days I envision him looking up at me and running out and in the door with his brother and sisters and not have to wait to be picked up and placed in the yard. One day he’ll run with the “big guys” and love every second of it. And, if wishes come true – one day he’ll even be able to wet that bush, too!

It is with deep sadness that I write that Goober went to the Rainbow Bridge early this morning. He took a turn for the worse yesterday and had to go to the Emergency Room. It seems he developed a quick infection and it got the best of him. His little body just couldn’t take it anymore.

Deepest thanks go out to everyone who gave Goober a second chance at life. He had a great 13 months, considering all of his problems. He touched and inspired so many people with his courage and will to live. He will live forever within our hearts.