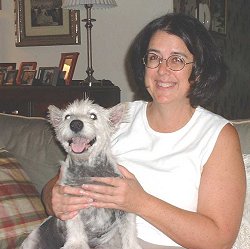 When my husband and I were combing the shelters for a few dogs to bring into our foster program, Little Orphan Angels, one Sunday, the animal control officer (ACO) showed us a little Westie they had been housing for a few weeks. She told us that he was found as a stray with his collar “growing into his neck” because it was too small. In addition, he had a bone lodged in the back of his jaw. He had apparently gotten so hungry he had tried to eat a bone which then got stuck. Because of the bone lodged in his mouth, he had a bad infection. If all that was not enough, he also had this black skin that looked like elephant skin (we now know to be Malassezia). The ACO said that when they bathed him for the first time the black skin and dirt just sloughed off and turned his bathwater black. They had to bathe him several times before they were satisfied, and still, he had black, scaley skin and a bad odor about him.

Soon after he was picked up and cleaned up, he went to surgery to remove the bone from his mouth. Then, he had to complete a course of antibiotics for the infection. Everyone at the shelter fell in love with his personality, but they were concerned that since he did not look (or smell) that great, he would not get adopted and would have to be euthanized. Hence, they pointed us to him on that Saturday.

Now, with a dog who has no significant medical conditions, we always check with the board and find the appropriate foster. So, we could not take the friendly little Westie that day. We did ask the ACO to put a hold on him and told her we would be back the following week. We did return to pick him up the next week and took him straight to our vet.

Unfortunately, Westie’s have very specific medical problems and not all vets are familiar with them. So, the first prognosis we received was not optimistic. Luckily, the newly named Boomer had a great foster mom who looked into the local Westie Rescue and got some information on a great, knowledgable vet. We drove across town and saw them and were given better news, but could not continue to drive so far for Boomer’s treatments and check-ups. Finally, we came across one of our regular vets who turns out to be very knowledgeable about Westie’s and got Boomer on the right course of treatment. This, of course, sounds like good news, but the right course of treatment for Boomer was quite a regimen! He had about 4 pills he took 3 times a day. He had to have a bath every other day with alternating types of shampoos, and he had to be on special food. Oh yeah, and he STILL smelled! He also itched! Boomer was so itchy, in fact, that he would drag himself across the room on his stomach!

Of course, no story would be complete without a happy ending, so here it is…Boomer was at the Petco where we do our adoptions several weekends and his various foster homes (he was a lot of work but so sweet, so our fosters took turns keeping him) for a few months. Finally, a woman who had previously owned a Westie in worse shape than Boomer e-mailed us. She was looking for another Westie since hers had recently passed away. They met, and it was love at first sight! The adoption was completed the following week.

Boomer now has a great home, is done with most of his medication, and is growing fur! He is the hit of the neighborhood and the best friend of his new owner (as pictured above)!

Thanks to Westie Med, Little Orphan Angels, the North Richland Hills Shelter, Parkside Animal Hospital, and his new owner Connie, Boomer is living the life every dog should lead–a very happy, healthy one!