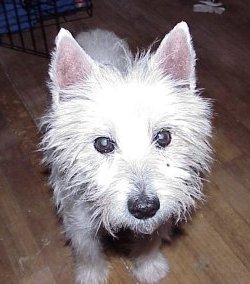 Angus had been at the Halifax Humane Society (Daytona, Florida) for several weeks. He apparently was found in the home of his owner, who had been dead for a few days. After much legal action (certified letters and such), he was released to Westie Rescue.

Angus is about eight years old. He has mild to moderate cataracts, and is mostly deaf, probably due to chronic ear infections. He has bad skin, but that is clearing up with the help of antibiotics and medicated baths (and flea control).

He is an absolute love. He really doesn’t know how to play but tries. He does toss toys around and tries to catch them. He doesn’t do it for long, but I think it is because his teeth bother him (that will be taken care of after Thanksgiving!). He loves sitting on laps and giving kisses. He gets along with other dogs and cats, but would love a ‘special somebody’.

WestieMed has been incredible with his medical bills!
Beth Garwood Florida

Our Angus is doing just great! He’s a funny ole guy, but a pleasure and much loved.

There are many responsible for making Angus’ rehab. a reality and we are grateful to all who made it possible—most especially Beth who took him to the doctors, etc. and gave him her special loving care.

Angus’ stocking is hanging up, waiting for Santa to fill—-probably some soft, small toys that he can throw up in the air and TRY to catch (not much luck, however.) I’m sure that in his own way he wishes you all at Westie Med—-and Beth—-a joyous holiday season. And, I add our glad tidings, too!