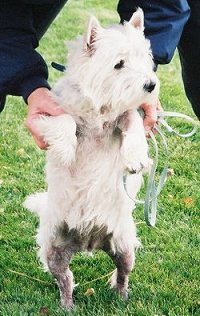 I received an email from a man about his five-year-old Westie. She had a severe skin problem and they didn’t want to deal with it. They had bought her expecting to have a show dog and to breed her a few times, and also as a family pet. She developed a skin problem and tore her hair out in patches all over her body. They bred her in spite of it. One puppy died, and she killed the other one, probably because she was so miserable. She had gotten an infection inside so bad that they had to do a complete hysterectomy. They said her personality changed after that and that she was sometimes a little nippy. They were afraid she might bite their nanny’s son, who is two years old. They had fought the skin problem for five years by shampooing her with Selsun Blue and didn’t want to keep trying. To be fair, they did feel that they were doing the right thing by giving her up to someone who might know more about how to help her. The man brought her to me, and I did see her nip towards him once, but she has never once tried to nip me in any way. She is a sweetheart.

Katie was diagnosed as having a Staph infection which could turn into Malassezia if not properly treated. She is now on the right road to recovery.

Thanks to Westie Med, her medical problems are being taken care of and she will soon be ready to be placed in a new loving home with a nurse who is willing to keep up with the treatments. I’m thrilled for Katie. I think she will finally know what ‘real’ love is.

You can see that Katie is growing hair back on her chest and looks great!!! She’s a very happy little girl and adores her new mom and dad.

You’ll be so glad to know that Katie is doing wonderful. Rory Litch took such good care of her when she first came into Rescue in Reno. I was so fortunate and blessed to be able to adopt Katie in January of 2003 and in the first three to four months, we still had problems with her allergies and licking of her back legs. In April, I finally did have a full allergy test done on her and now I know exactly what…food and environmental..she is allergic to. Even into April….maybe because of the spring allergies, she was still having licking problems…..and then she finally cleared up. She is on a duck and potato kibble and only carrots, bananas, and apples for snacks. She is doing wonderful. We walk together and this past winter, we even cross-country skied together. My husband and I adore her and we thank you for your help and services. She has made our life so happy.