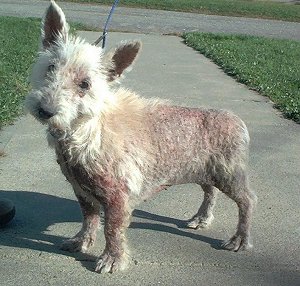 I received a call from the Westport, SPCA about a Westie/mix they had in their shelter and they wanted to know if we had any room for her. Minnie was brought in by the dog control officers from someone’s farm. It appeared that someone dumped her on their farm and drove off. The officer had to carry Minnie in as she was unable to even stand up. Her nails were so long they curled under and we’re into the soft pads of her feet, she had no hair and open sores on her body. Both eyes were infected as were her ears.

The Westport, SPCA did an awesome job with Minnie and tried hard to find her a home as they dealt with her ever-mounting medical problems. When Kerry called me they had had Minnie for two months and felt if a home could not be found for her she would be euthanized soon.

My husband and I headed out to the shelter days later to see Minnie. Doing rescue for a few years we thought we had seen it all, but when we saw Minnie, she raised the bar for us of what we thought was shocking. We both spent time with Minnie and Kerry and talked a lot about the care and long-term prognosis – but I think we all knew we were going to take her home and get her some help.

Soon we were heading out for the long trip home and Minnie laid on the seat being a perfect angel except for constant scratching (and, well. causing our eyes to water from the smell). As soon as our feet hit the front door, Minnie was in the tub. She sat perfectly still for the whole 10 minutes the shampoo had to work while I massaged her poor skin and tried to assure her that we would get her back to health. We set her up in the kitchen away from the other pets in case she could possibly pass something to them, and she laid down and slept for four hours.

Her first vet visit turned into an overnight stay. The number of things she needed checked and done just couldn’t fit into a visit, so I reluctantly left her in their care and headed home alone. I must have called them four times checking on her and while they were not optimistic at all, by the next day the vet was as anxious as we were to get Minnie back to health. They saw in her what we did – the sweet pup with a sparkle in her eyes that even her extreme health couldn’t diminish. We headed home with shampoos, medications, creams, and sprays and fell into a schedule by the end of the weekend.

She now receives one bath a day in alternating shampoos and sometimes a second bath a day in oatmeal shampoo if she’s having an itchy day. She is on antibiotics, medication for the Malassezia, eye drops four times a day, and an antibiotic for the eyes twice a day. Her ears were infected so she also has cleanings and antibiotics twice a day for that. She loves her oatmeal spray and Gold Bond powder which not only helps her itching but she looks white and smells so much better. We have noticed for the first time yesterday that the odor is better and her eyes are clear of infection.

When we take her somewhere, she does draw a lot of angry looks from folks, and I know the anger is directed at me thinking we did this to her. But once we explain, they are on the floor on all fours talking and petting her and telling her what a sweet girl she is. She eats it up.

We are heading into our second week with Minne. Her ears no longer have an odor and she is running around the kitchen now and playing for the first time. She is very shy around strangers still but she lays in my lap and seems happy to just have a family. She does not shrink away when we touch her now and she has even barked a few times and wagged her tail for the first time yesterday.

WestieMed, thank you so much for the help you have given us – not just for vet bills, but for emotional support and also great insight and information. Minnie is slowly showing us the sweet little dog that has been hidden and it’s because of your help that this is possible.

Minnie has a skin condition called Malassezia (yeast infection of the skin). This condition is becoming more and more prevalent among Westies. Westie Rescuers are seeing cases of this all over the country. This condition is very treatable…if treated properly. To help other Westie owners, we are making information about this condition available on our web site. You can read about it here: http://www.westiemed.org/malassezia