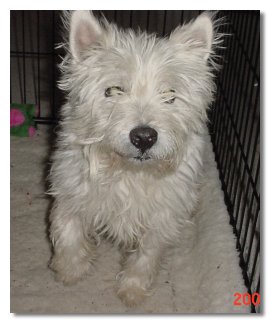 Winston came from a shelter in South Carolina in November 2001. Soon after arriving in rescue, he was treated for internal parasites and vaccinated, and he tested positive for heartworm. It was also determined that he was in a very weakened condition. His x-rays showed that he had an enlarged heart and a lot of fluid around the heart. Due to his weakened condition, the heartworm treatments would need to be spaced one month apart. His second heartworm treatment was received in December 2001. On January 15,2002, he was back in for a recheck and cough that had developed. Blood work revealed a secondary infection, and x-rays revealed his heart was still enlarged; however – he was clear of heartworms! Because of the continued heart enlargement, an echocardiogram was suggested for further diagnosis. This was performed on January 29, 2002. The echocardiogram showed that the right ventricular was thickened and there is a small amount of leaking. Additional x-rays are recommended in one month prior to anesthetic procedure for neutering. Winston will also need to take a baby aspirin every three days for the rest of his life, after the antibiotics are completed. Another echocardiogram is recommended again in six months. Since arriving, Winston has been kept confined with little to no activity as required for his care. Any exuberant exercise or activity could cause him to have an aneurysm. Winston should be able to lead a normal life once he has recovered, but he could be susceptible to congestive heart failure at a earlier age.

Thanks for inquiring about Winston, my favorite subject! He is doing well. He was adopted on May 1, 2002, and now resides in West Virginia. His health has greatly improved. If you are planning to attend Montgomery County weekend this year (in October) you may have an opportunity to meet him at the parade of rescues. Thanks for caring about Winston.