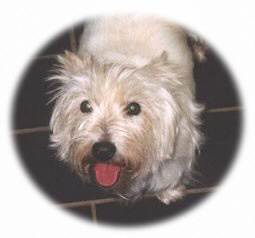 Kati was a stray Westie not wearing a collar or any identification when she was hit by a car. She was taken to a veterinary hospital for emergency treatment of her fractured pelvis and badly lacerated leg.

At that point a Guardian Angel stepped into Kati’s life. A man was at the same hospital visiting his dog who was recuperating from surgery when he saw Kati being treated. When the hospital staff told him Kati was a stray, he immediately offered to adopt Kati despite knowing she would need orthopedic surgery for her injuries. During the requisite waiting period for strays, Kati’s previous owner did not claim her and the man was able to adopt her.

Kati did not appear mistreated or undernourished and is not frightened by strangers or other dogs. She seems to love people and gets along with her new owner’s dogs

After adoption, Kati’s new owner took her back to the clinic for a wellness exam, basic shots and heartworm check. The attending vet discovered that her tail was infected and it needed to be surgically “truncated.” While Kati was under anesthesia for the procedure, the vet also checked her teeth and found several badly abscessed molars. Six teeth were removed and the abscesses were treated.

Kati is recovering and healing nicely. The stitches will be removed from her leg and tail over the next two weeks. However, healing of her pelvis and hip is expected to take longer. Orthopedic surgery is anticipated in the future to repair the damage to her hip and pelvis when the wounds are healed.

Kati is doing wonderfully, thank you, and has established herself as the alpha-dog-in-waiting among our pack. She has totally subjugated our latest, a black lab puppy named Jack who now outweighs her by forty plus pounds, and is the undisputed head of the doggie fun patrol (if any dog is having fun without her, she breaks it up!). She has had no subsequent problems with the injuries that brought us together (Kismet?) and does not appear to need any additional orthopedic treatment, according to the docs at Pender Veterinary Clinic. Her amputated tail has healed completely and she has no trouble “communicating” with the stub, I can attest. She is, without a doubt, the yappiest dog I have ever heard, which is one of the reasons I like terrier breeds so much, and which drives my wife up the wall (an added benefit, from my perspective!…just kidding). She has a favorite spot at night, the pillow just above my head, from which she monitors and cows all the other dogs. She is also an avid squirrel hunter, along with our yellow lab, Sophie, and can spot one of those critters all the way across our 1-acre side yard. And, strangely, the first time I took her to the groomer she seemed to know where she was and what was going to happen…and was, from the groomer’s report, a little angel. I want to thank you again for making this “fit” possible, along with the local Westie Rescue League.

Keep up the good work…your program and related efforts are greatly appreciated.

Kati is doing quite well, thanks to you and some wonderful vets at Pender Vet Clinic, although at times she seems a bit suicidal! By that, I mean that she thinks she’s the alpha dog…even though four of the other seven dogs outweigh her by forty pounds or more, and the other three are in her weight class! She is definitely an “in your face” kinda dog. The new black lab puppy, Jack, is ten months old and now weighs about eighty pounds…and he is her personal chew toy. I can’t believe how he puts up with the abuse, but he seems to enjoy it, and it keeps her from attacking the other dogs. At night, her spot is on the pillow above my head, which is the only place where I can be assured that she won’t sneak up on the other dogs while they’re sleeping. Except for the missing tail, there is no evidence of her past physical trauma…and she wags the stub like there’s no tomorrow! Rest assured, she has definitely come to the right house/paradise, and has provided endless hours of entertainment by way of earning her keep. Now, if I could just keep her from attacking Barkley, the Yorkie, things would be just fine. We don’t have a digital camera, but I’ll “snail-mail” a couple of photos to you, she’s a wonderful-looking Westie, even with the horns! Take care, and keep up the good work!

As promised, here is a photo of “Kati” in all her glory. At the top of her list of “loves” are: the beach, Jack (the 80# black lab puppy(?)), visits to the groomer, snapping at the other dogs, and snoozing on the pillow above my head…and the list goes on and on. She combines the scrappiness of my sorely missed Schnauzers, the protectiveness of my chocolate lab, and the no-holds-barred “rub my belly and I’m yours” affection of my beagle. In short, a great dog and very welcome addition to our “pack”. Thanks to all the folks at WestieMed, the local Westie Rescue folks, and even the idiot prior owners of Kati for NOT coming to look for her after her accident. Take care and keep up the good work.

Ed and Sue and all the mutts and parrot