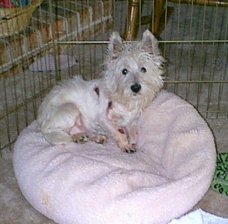 Peter is a six-month-old Westie puppy who had been left outside tied to a car and was ultimately dragged by this car some distance before the driver realized what was happening.

Peter was rushed to the nearest vet to stabilize his wounds, and he was then transferred to a specialty vet hospital and put in ICU on IVs. Peter stayed in ICU for three days, then went to regular care, with wound dressings being changed every other day. Peter was surrendered to Westie Rescue of Austin, where he is getting continued care. His prognosis for recovery is excellent, with continued bandage changes for the next month. His skin will heal, although he may not re-grow much hair.

Peter has that wonderful Westie attitude of spunk, curiosity, and patience. He lets the vet do his changes, under anesthesia, and eagerly waits to go home again with his foster mom. He loves being with the other Westies in the foster home, although he has to be penned nearby so they don’t get too rough. He is anxious to join them as soon as he can with playtime.

Peter gets his own one-on-one playtime with his foster mom and can explore the backyard by himself. He shows no fear or aggression and should be a wonderful pet for a new family once he is released from the vet’s care and his wound sites have healed. Many thanks to the wonderful people at Westie Med for making sure his recovery is possible.

All bandages are now off, and he is healing beautifully. He looks funny because he had been shaved where the injuries are, but nowhere else. He is getting better and better every day, and I let him play with the others for an hour or so at a time now. Throughout all this ordeal, he has not had but one potty accident in the house in the three weeks I have had him!! He is so well trained!!

Great News! Peter has been discharged from vet care and is healing beautifully on his own now. With the help of WestieMed, we were able to expedite Peter’s care and he didn’t need surgery after all. And the total of the bills came in at less than expected/authorized by the WestieMed Board. Thank you so very much for that much-needed and critical financial assistance.

Peter’s hair is growing back in over the scarred areas and the hairless parts will be hardly noticeable at all. The only problems he has now are the toes that were broken, which are now sticking out at odd angles. My vet says there is scar tissue between the toes that is causing that. He felt as additional healing takes place the toes might realign themselves in a more natural position.

Again, thank you for your wonderful help in making Peter’s recovery possible!

I am happy to tell you that Peter has been adopted by a family that recently lost their older Westie due to cancer and they are all elated to have Peter in their family now. It was love at first sight, and Peter took to them immediately. He went trotting off with his new Dad and never even looked back over his shoulder!!

I loved caring for Peter these past three months, and it was difficult to let him go. I had so many qualified families ask about him, and the decision process was hard. Peter’s wound sites had healed very nicely, although he will always have the scars and minimal hair there. In time, he will have enough hair to cover all the bare spots and with good grooming, one will never know what he has been through.

Peter was a real trooper. He endured the many dressing changes with minimal complaints, and loved getting the petting and holding everyone gave him. He seems to not have had any residual traumatizing, and even was eager to go for car rides! I will miss that little fellow.

My name is David K. and I am the one who adopted “Peter” that you so graciously helped stay in this world. I thought I would drop you a short note to let you know how “Peter” (his new name is Willie) is doing.

I adopted Willie on May 4th of this year after quite a bit of correspondence with Barbara Ott of Austin Westie Rescue. Since his first few minutes with me, I could tell that he is one lucky and special pup. I would have thought that with all the trauma he had gone through that he would be leery of just about everything. I’m glad I was wrong. True to Westie form, he loves going in the car and being my shadow. Chasing squirrels and stray cats is also a love of his. He is a very normal and loving Westie and I thank everyone who participated in his recovery. I will cherish him until the day we go our separate ways.

Just a short note to let you know that Willie celebrated his first birthday with a few friends. We all had fun and Willie really enjoys playing ball and tug-o-war with us and his best friend Sampson (my girlfriend’s Golden Retriever). He is doing so well that he is now starting to run the household as my last Westie did. He is an absolutely loving dog and I really think he knows just how lucky he is to have friends like you.

It is with deep sadness that I have to tell you that Willie (AKA Peter) has gone to the rainbow bridge.

He developed an inoperable tumor in his colon area and that led to total renal failure.

Your organization made a great decision to help with his previous injuries.  He couldn’t have been a better dog.

His two brothers and sister will miss him as much as Lisa and I.

He always showed us great courage and love.  He will be beside my other Westie (Kip) at the rainbow bridge.

Peter’s early photos are graphic and could be very upsetting to some. Please do not view the photos if you are easily upset.