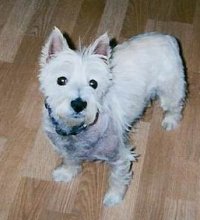 Emma came into my life on June 15th. Emma is a rescue as her owners felt they could not deal with her skin allergies any longer. When Emma joined my brood (my two westies Kelsey is ten and Mollie is six) she was just a bundle of energy and fun!. I took Emma to my Vet to review her allergies, and schedule her for spaying. I put her on the ARF diet and she loved it! Within a week her skin was looking good and she was recuperating from her surgery. I did notice at this time though that Emma was walking much slower than she had. One night she just kept falling over, so I took her to the emergency Vet. They did a blood panel (good) and x-rays. The x-rays showed her left hip sock was basically gone. The Vet said she must have been in a lot of pain for quite some time. It just broke my heart to know this little one had been suffering for so long.

The next day, I took Emma’s diagnosis to our Rescue board, to ask for their approval for her surgery. A week later Emma was home, resting soundly. I did notice though after about a week she was still having a lot of difficultly walking, and when she was sitting her head would sway back and forth. I had to start to hand feed her, as she just had no energy/strength to do it on her own. Everyone I spoke to said this was not unusual given what she had just been through (with the hip surgery) and it would take her a few weeks to recover.

The next week I called my Vet and asked to bring her in for another follow up (she had had two since her surgery) as I just felt something was wrong. Later that night Emma started having seizures. I rushed her back to the Emergency Vet and they put her on Valium and Phenobarbital. . They asked to keep her overnight and to review her progress in the am, while they ran some tests.

I got home and just cried. I had never felt so helpless. I got on the Internet and started emailing breeders; Westie Club of America and Westie Med. Angie emailed me right back! She was just the shot in the arm I needed not to let any negative thoughts get the best of me!

The next day, I went in to see Emma, it was a heartbreaking sight. She was on Phenobarbital and was completely out of it. She was having involuntary muscle spasms. If I touched her the spasms increased. The Vet said so far all of her tests were normal, which ruled out epilepsy. The Vet said I should think about an MRI, as they believed at this point Emma’s condition was neurological.

I followed up with Westie Med and submitted Emma’s request for help. Westie Med moved so quickly, letting me know Emma was approved for her MRI within twenty-four hours! I can’t tell you how great it is to know so many cared about Emma and were there cheering her on!

Emma had her MRI and I came to see her later that day. The E-Vet said Emma had come thru just great and was actually sitting up, taking in water and food (which was a surprise to us all given where she had been twenty-four hours earlier).

MRI did show a lesion on her brain (in the back where her motor functions are, which did help to explain why she was having trouble walking). Also, there was a high level of white cells in her spinal fluid, which indicated she may have one of three possible infections: Distemper, GME, or Cancer (which was a distant third).

The E-Vet then shared that we could have sent her fluids out to be tested (to narrow down the cause) but they had missed the Fed-X delivery person and the fluids wouldn’t hold for another twenty-four hours. It was then I stepped in and took over. I said I would get the vials to Fed-X (even though the office manager insisted it was too late). I started calling around and found a Fed-X open until 8:00 pm, which gave me forty-five minutes to get there. Twenty-five minutes later (and still no packages) I headed back to the E-Vet area and said I would pack the vials myself as I had only twenty minutes to make it to the location. I started putting the Fed-X boxes together, while I “watched” the technicians put everything else together.

I arrived at the Fed-X location with five minutes to spare. When I got to the counter the agent asked me what I had. When I shared what it was she insisted on opening the boxes to see how they were packed. To make a long story short, they informed me they were not packed correctly and they wouldn’t go out. I explained the urgency, but unfortunately they said they could not let the boxes go out. I turned to the people in line behind me and asked them for help- Emma was truly blessed that night! Two people in line were medical supplies sales people and had everything I needed. We went out to the parking lot and re-packed the vials! The Fed-X team kept the office open for me!

The next day Emma was sitting up and off of all her IVs. The E-Vet started her on prednisolone (to help with the inflammation). They said if all went well she could come home. I brought Emma home last Saturday (6/29) and it was just great to have her home! I immediately started Emma on vitamins and minerals to pump up her immune system. I know how hard prednisolone is on the body, and the only way she was going to be able to fight this was with some help!

The first three days were very hard, as Emma needed to take her meds every couple of hours and needed to be carried to the grass to do her duty. I called on my neighbors and my critter sitter for help. I came home every day at lunch as well. By the fourth day, Emma had control of her bowel movements and was really trying to walk.

I took her to a holistic Vet and we started her on an acupuncture program. The next day (7/4) I was taking my dogs for a walk and Emma started barking up a storm, tail wagging all excited! Well, I couldn’t leave her home. So I called my neighbor and asked her if she could help me walk my dogs. I put Emma on the lawn with Cindy (my neighbor) and I went in to get my girls. Cindy called out that Emma was walking! I ran out to see, and she sure was! Now, I am not going to say the acupuncture was the cure, as she was definitely trying on her own before, but I can’t help but believe it did help her! Emma made it two blocks before she pooped out! During this time Emma’s test results (two of the three) have come back negative. The remaining one is the distemper test. The E-Vet said she believes it is GME (which is so rare no one knows much about it). All I know is that Emma is making great progress, I know I have to take one day at a time with her as I may only have her with me for a few months (if it is GME the prognosis is not good). But my little girl is walking, eating, playing, and in all ways a truly stubborn Westie!

I just want all of you to know HOW GREAT WESTIEMED IS! if it wasn’t for them, Emma would not be here right now – that I know for sure!

Hello! Miss Emma is doing fantastic! All of her hair has grown back in, she is running, jumping and is all and all a normal, happy go lucky Westie!. She is a dedicated BARF eater, and (in my opinion) it has kept her healthy. As you know, many thought she had GME (which is fatal)…after six months she has beaten the odds (if she has it) and is very strong!

Emma is doing just great! She is big and healthy!. You can barely tell she could not walk, she runs and plays like all westies who are loved and incredibly spoiled!