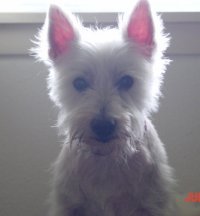 I received a call from a man in southern LA who said he had adopted a Westie from a local shelter. He went on to explain that after taking her to the vet and learning of her health problems he could not keep her and wanted to turn her over to rescue. Dave and Mary Shipman went to pick her up at the vet’s office and brought her along on a rescue transport to me. I was told that she had a bladder stone but had no idea how severe her condition was until Mary and Dave filled me in. The poor baby was completely incontinent and had to wear a diaper when indoors. She arrived on Sunday and we were at my vet’s door Monday morning. Surgery was done that afternoon and a two-inch stone was removed from her bladder. She had also been diagnosed as having a level three heart murmur, my vet could not find anything that serious and felt like it was a level one at most. No surgery required! She came home with me and the change was amazing, what a little sweetheart she is!

But Lilly’s troubles were not over, she is heartworm positive and began her treatment on 7-22-02. She is doing great so far and I expect a complete recovery!

I have no idea what circumstances led Lilly to that shelter… I can not see any behavior problems at all, she gets along well with my other Westies and loves to play. Now she has a family in her future that truly loves her, I am looking for that family now. 🙂

I have to say that without this help I would not have been able to continue with rescue until I raised additional funds somehow. Once again Westie Med has kept me afloat and I can not thank you all enough!!!

Lilly was declared all clear of those nasty heartworms last week and was adopted this weekend. They are previous Westie owners, it was love at first sight!

Lilly is doing great. She has fit in very well with our family, except for the cats of course. She has had no further medical problems except she favors her left rear leg. She loves to be the center of attention and doesn’t eat unless she is in the room with us. She sleeps at the end of our bed and has proven to be a good watchdog, although we haven’t found what she is barking at. She is also a skilled hunter with a heart. One day my wife let her in from the backyard with what looked like leaves in her mouth. It turned out to be a small bird that appeared to have no physical trauma though it was in shock.

We love Lilly and are very thankful for your assistance.

Miss Lilly is doing great and has been a wonderful part of our family. She remains heartworm free. Gayla has really spoiled her. She loves to drink her water with ice in it and she thinks it is a real treat to drink out of a handheld cup. She eats special food supplied by our vet so that bladder infections can be avoided. She loves the attention that we give her. She does tend to be obsessive-compulsive especially where our cats are concerned. We keep them separated, not knowing who would be the winner in a confrontation. She has been such a blessing to us and we thank you so much for helping us find her.