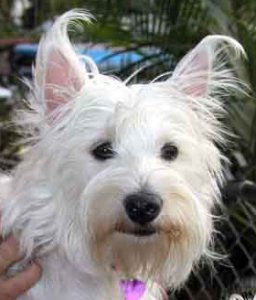 On the morning of April 2, 2002, I was walking through our local animal control, as I routinely do, looking for Chihuahuas or other similar dogs in need of rescue. Due to lack of space, time, and money unfortunately this shelter has to put many dogs down, for the slightest ailments. On this particular morning, we came across a little West Highland White Terrier (two-year-old Cody), who was signed off (to be euthanized), and we looked at her, played with her, and couldn’t figure out what the problem was, that would cause her to be put down. When we looked at her kennel card, we saw that she was owner surrendered for being pregnant. Pregnant dogs are not put up for adoption at this particular shelter. So, we went to the kennel manager’s office and told him we were going to pull this little lady from the shelter… and we did. She went to our Veterinarian, who confirmed her pregnancy, and said that she was otherwise healthy. Approximately two weeks later, on April 17,2002, she went into labor. After a short while of her in labor, and not producing puppies, we rushed her to our Veterinarian who did x-rays and said that she needed an emergency cesarean section, in order for her to deliver successfully.

Thanks to WestieMed who so kindly donated funds to pay for this C-Section, Cody was able to successfully deliver five sweet Westie buns. Unfortunately, one passed away several hours later. The other four proved to be completely healthy, and were recently spayed & neutered, and have loving adoptive homes waiting. Cody, the pups mother was surprisingly the first to be adopted, by a wonderful home, which owns another rescued Westie.

Thanks to the kind contribution from WestieMed, five lives have been saved.

We asked how the “Buns” were named:

Response: Well, we are a bit nuts down her in Florida (maybe the heat). While Cody (the mother) was pregnant, we kept asking her “how many Buns have you got in there”, “how are the Buns today” etc., etc. When we would bring her in to the vet for her check ups (before birth), we would say to the vet “how are the buns” etc. When she went in for her C-Section, the vet came out of the surgery room and said “The buns are here!!”….And it kind of stuck from then on…

All four of the Buns and their momma Cody are doing just fine. We check up with our adopters at least monthly, and to date all reports have been of progress. Two of the puppies owners have acquired personal/in-home trainers to help modify behavior, but all are doing great with potty training etc. All of them are still completely healthy, except the smallest puppy Elma (re-named Isabella) had come down with a mild allergy to grass, but is doing well now that her folks know the route of the problem. The mother (Cody) is doing well also; she and her husband (adopted male/neutered Westie) are best of buddies and keep each-other entertained while their Mom works.