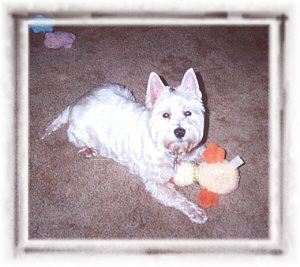 About 10 a.m. one Tuesday earlier in August, I received a call from the concerned owner that they had heard I rescued and helped small dogs. As I have helped in the rescue and placement of Cairn Terriers, Cavalier King Charles Spaniels, and some mix-breed puppies, I indicated I can sometimes help. What did they need?

Rags story begins when her well-intending owners of eleven years were moving and the main caregiver was returning to full-time employment. They decided to put her in the newspaper for free considering people would not be interested in buying an older dog. They did find someone interested and just let them pick the dog up and felt all was well.

For the original owner, all was well until about two weeks later someone called saying they had found their dog, locating them by an old tag left on Rags’ collar. Rags had apparently walked in their back door as they opened it to go out one evening. She was so filthy they did not know she was even a Westie. They bathed, defeated, and treated her ears thinking something had chewed on them as they looked infected with sores. Three days later the original owner picked her up and that is when they called me. They were afraid to try to place her again and did not have the time for her. They also mentioned sending Rags to animal control if I could not help.

So not being one to say no, I picked up the sweetest, confused, pretty little white dog I have ever had the pleasure of meeting and saw she needed immediate vet care for her ears. They had her groomed but had not had her to the vet. I and several others who heard of her plight could not understand how someone could give up such a beautiful little dog after owning her all her life.

After searching on the internet for what seems like hours, I found the representative for WHWTCA Westie Rescue. I told her I would gladly foster Rags and needed her help with placement for Rags, but also had very limited personal funds for veterinarian costs. My funds go very quickly having nine Cairn Terriers, most with special needs, two with seizures, three with severe skin allergies, one has had surgery to remove hip joint, etc., (who by the way have all been getting along wonderfully with Rags, she is so sweet). She immediately told me to look up WestieMed.com and see if they could help. Thank goodness there is such a group.

Rags first visit to the vet indicated she was heartworm free but had a severe ear infection in her right ear, also eye and skin irritations. The vet could not believe how strong and spirited she is for her age. She would need drops twice a day, plus daily and bi-weekly cleaning of both ears for blockages, as her hearing was impaired, and oral antibiotics for up to three months. As I had also noticed excessive drinking and piddling, which the original owner said she had never noticed. Rags also needed blood work which indicated no diabetes, thyroid problems, or other causes. So more and expensive blood testing has been done for the possibility of Cushing’s Disease. Without WestieMed I would have had difficulty finding she has early stages of an unpleasant but thank goodness a treatable problem. She will need medication for the remainder of her life, but it can be a good life.

And even though I have fallen in love with her, I know she can be placed in a new home with people who can really care for her no matter what.

Rags are in a new long-term foster home with Sharon and Michael and is doing well. She’s a sweet, though quite an overweight girlie!

On behalf of Rags, WestieMed would like to thank Robin for fostering her for so long and taking such good care of her while a new foster home was being sought.