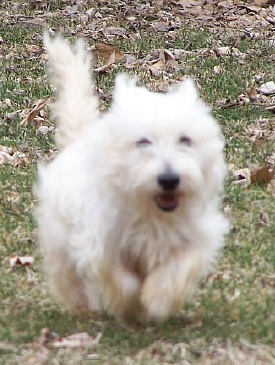 I am an independent rescuer.  I became enamored of Westies when I was working with Maine Coon Rescue.  I live in NE MO and had an adopter wanting one of my Maine Coon rescues.  He lived in Springfield MO (SW MO) and after much discussion, we agreed to do some driving to meet.  I had seen an advertisement somewhere online for a “Dog Auction”  I had heard all of the horror stories about puppy mills and decided since I was in the neighborhood I would drop in there and see for myself.

The cat was delivered and I drove another 25 miles to a farm in SE MO where the auction was being held.  I was surprised to see security and a sign that said no cameras.  I looked around in the barns and saw many breeds of dogs waiting to be auctioned off.  I picked out a couple I thought were very nice looking and sat down in a tent with a five-page book of the dogs being auctioned.  Birth dates and statements like aggressive breeder ready to whelp etc.  The dogs were stood on a table and the auctioneer sold them.  The dog I had really liked was a Yorkie who sold for $1,400 dollars.  The auctioneer said, “you will get that back from her first litter”.  Toward the end of the auction, a yellow-brown dog came upon the table.  “This is a six-year-old male West Highland Terrier still got some juice and will give you some nice pups” the auctioneer cried.  Do I hear $50  fifty anyone?  No one bid.  He was ready to take him off the table when I heard myself say $50.  His name was Chris of Four Oaks, an AKC registered boy, with his right ear so crumpled and swollen I couldn’t get a q-tip in it to clean it.  Chris turned out to be white under all the dirt.  I called his former owner and ask about his ears.  The guy said he had tried everything — vegetable oil, alcohol, and Listerine.  To make this story shorter than it was Chris stayed with me for six months eventually being adopted by some great folks in a huge RV who traveled with their dog who was also a Westie.  This experience with Chris hooked me on the breed.  Chris was crate trained from day one.  After his first bath, all he wanted was to sit with me on my lap.  He had a hard time learning to go up and down steps and didn’t have a clue what a toy was.  It was a joy watching him learn to be a housedog.

Now on to Alice.  Alice and her hubby Jake came to me in October 2007 because I had ransomed their two male pups and sent them on to Westie Rescue of MO.  The breeder called me and ask if I would take the parents also.  Jake, the daddy, went to Cincinnati Westie Rescue and when I discovered Alice was pregnant I decided she could stay with me until the pups were ready to go.  Alice got a heartworm test, was wormed and she was given the basic shots.  The pups were born in early November,  two boys, and two girls.  George and Gracie, Hannah and Elvis.  Alice looks as if she has been bred every time she was in heat.  I know the pups I had rescued were born in April.

The previous owner worked at a puppy mill and had bought Alice and Jake to breed in her backyard.  They had been left out in the yard all summer.  Full of fleas ungroomed and Alice had rubbed all of the hair from her back end trying to scratch the flea bites.  All of the pups had adopters waiting for them.  My granddaughter asked for Hannah,  Gracie was to go to Houston TX where an adopter already approved by Westie Rescue of OK was waiting for her.  Elvis and Alice were going to a terrific home near St Louis MO.  And Georgie’s home in Chicago was getting ready for a home visit.  Alice and Elvis went home first.  Within a week the adopter called me with unbelievable news.  Alice tested positive for heartworms.  I was floored.  I had her tested, what went wrong?  My vet called her vet and they decided that Alice was in an in-between stage when she was first tested.  The test did not show active heartworm.  The adopters’ vet quoted the treatment at “$600 dollars and a lot of heartbreak down the line.”  I am unsure what he meant because my vet told me it was nowhere that expensive and Alice would be fine.  She was at most a class two infection.  I was so relieved.  The adopter had already decided to adopt the other male puppy so Alice is here with me going through the treatment.  She is a real trooper and my vet has been so helpful.  He kept her at the clinic each day after her shot and gave her something for the pain.  I was emailing a Westie Rescue volunteer in IL who told me about WestieMed helping out with medical needs.  I had already spent a lot on getting all of Alice’s puppies spayed/neutered shots, etc. and was very short on money.  I can’t tell you how much it has meant to me to receive this help.  WestieMed is the best!!

Oh yes, I did attend one more dog auction and ended up with a seven-month-old male Westie pup.  He was very reserved and not very friendly.  His name is Duncan McCloud and is my forever Westie.  Alice will be ready for a new home in four months and we will find her the best home ever.

Thank you WestieMed for helping all of these wonderful little dogs.

Alice passed her second heartworm test.  She is negative.  I learned a lot from this.  The treatments are very painful.  The vet kept her the first day of her shots at the office.  When I took her for the second shot they were going to let her go home with me.  We got a couple of miles out of town when she began to whimper and shiver.  I pulled over and we sat for a while.  I ended up taking her back to the vet and asking if they would monitor her and I would pick her up that night.  When I went back in they asked me if Alice had ever evidenced seizures.   As she had never had a seizure I was baffled.  As they explained her behavior a little more I started to laugh.  Alice has a quirk.  She loves to chase lights and will lay for hours waiting for a reflection on my metal chair to flash on the wall under the desk.   When she first started this we thought she saw or heard a mouse or a bug but came to understand she is on alert when there are lights flashing.  The vet kept her in a stainless steel cage – perfect to reflect lights and shadows.  Even the vet got a laugh out of out quirky girl Alice.

Alice is in foster care with her daughter Hannah.  We have become very attached to her and her wonderful personality.  She is a smaller girl only fourteen pounds.  She is having some problems with her skin this summer the fleas have been awful and even Frontline and Revolution have not been 100% effective. So she is having the smelly skin and dirty coat.  We have spoken to the vet about a shot but she isn’t having the hot spots so we are holding off and using a special shampoo.  Thank you all so much for your help with Alice and her care.  She the most special of Westies I have had in foster care.  A true diamond.

Alice is still with us.  The perfect home hasn’t come around.  She is a great girl.  Barks to go out.  Her light fixation has caused some concerns with potential adopters.  Some think it is cute and some are a bit afraid she is seizing (well, she is, but we don’t call it that)  But no problem, she will always have a home here.  We will probably need to do some dental work on her, the vet said her teeth were stained and weakened possibly from the breeder giving doses of tetracycline when she was a puppy.  So Alli has lost some front teeth and the back ones look very yellowed.  She and my Duncan get along as well as two terriers can.  There are disagreements and then playful romps and tussles.  Just common Westie stuff.  Her daughter Hannah lives next door and visits daily. All in all, she is a happy Westie girl.

It is with great sadness that I report that Alice has left us for the Bridge.  She came down sick on Sunday, Sept the 12th and passed at the vets on Tuesday the 14th. She seemed to suffer little or no pain.  Dr. Hudson tried all he could but she went very quickly.  I am so glad I kept her with me, she enriched our life here and made us laugh with her antics.   Duncan is coping.  We had taken in a rescue Doxie and it has helped him fill the gap Alice left.