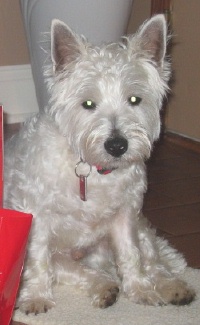 He thinks he can fly! It’s true with most Westies, but especially true with Jack. He’s adventurous, curious and loveable.

In June of 2007, we lost Maggie, our fourteen-year-old Scottish terrier to liver cancer. She had been with us since we adopted her from a shelter at one year old. She was truly a member of the family. After a few months, we agreed it was time to begin to look for another dog – one that could help fill the hole Maggie left in our hearts and our home. Since Maggie had come through adoption, our first thought was not a breeder, but a rescue agency to find our new pet.

Jack is one year old today and has been with our family for only two weeks. He came to us through the Illinois chapter Westie Rescue Mission of Missouri. While his original family loved him deeply, they ultimately surrendered him to WRM because Jack’s high energy made caring for him and their two special-needs kids very difficult.

We were so excited from the moment we met Jack. He is curious, high energy and loveable. From the moment he arrived, he began exploring and investigating our home – one room at a time. He didn’t slow down for two solid hours! Shortly after midnight, we thought it was time to try to get our boy to sleep.

We took Jack to our room with his familiar blanket and bed. Still curious, still exploring, undeterred, Jack tried to jump up on our bed and missed. We watched in what seemed like slow motion as he fell. He never winced, never yelped, but when he got up, he refused to use his leg. We were heart-broken that our boy hurt himself and we hardly slept all night.

A visit to the vet the next day gave the bad news – he had broken his leg. A second opinion confirmed the diagnosis and course of treatment. So less than two days after arriving in our home, Jack had orthopedic surgery to repair his leg.

He is healing well, bonding with our family and is an amazing dog. We are so glad to have him in our home. He’s had quite an adventure in the last month – he’d have an amazing story to tell!

We are thankful to WestieMed for assisting with part of Jack’s surgery bill. We are grateful that resources are out there to help families that rescue loving, wonderful Westies like Jack.

Just a quick update. Jack had his six-week checkup with the surgeon yesterday. He is healing but not healed.

Jack is doing great – walking without a limp, fully using the leg. I would highly recommend the group we used as caring and cost-efficient. Great Practice – Animal Emergency in Skokie. Well worth the hour drive to get there.

The biggest challenge is keeping him down. He continues to believe he is invincible! He’s getting more attached to us and we to him. He’s a loving, wonderful dog – we are glad we have him in spite of all the chaos and challenges. We are learning some of his quirks – he is very skittish around loud noises, fire, and anything around his head. Makes us wish we could talk to him to hear his story in his original family…over time I am sure he will forget and change. Our last dog was nervous around shoes for the first year – my son reminded us of that this morning.

Jack is doing well. He is adjusting emotionally. When we received him he had huge issues – every noise scared him, he would not take food or treats from human hands, would not obey even simple commands, and was a bit reclusive.

Today, he knows some basic obedience commands – sit, stay, shake, no (a big one for high-energy Westies!). He loves to play fetch with his favorite toys. He trusts us enough to take food from our hands. He is a much calmer dog and a great pet. We really love having him.

Healthwise, the leg is fully healed. He is one of the fastest dogs I have ever seen – loves to run in the back yard. On humid or cold days he will still, on occasion, limp on the leg that was broken. The Vet says this is normal and may just be a life-long side effect.

I thought I would send some pictures of Jack. Sorry ~ he is a little scruffy in these pictures ~ we don’t ever seem to get them right after he is trimmed up  ~ but he is cute anyway.

Jack is sitting up on my lap as I type. He has to be on my lap or near me when I’m sitting down. He is such good company.

He absolutely loves our granddaughter. We keep her on the weekends for our daughter and Jack is very protective of her. He goes into the room where she sleeps and stays by her bed until she wakes up. When we sit in the rocking chair with her ~ he has to be there too and she just laughs and reaches over and pets him. Our biggest problem is keeping their toys separate. They both want what the other one has…just like siblings.  They are going to be very good friends growing up!

We just love Jack and are having so much fun with him being part of our family.

His pins were coming loose from the previous surgery. The surgeon said that his broken bone healed perfectly and he should have no more problems. Pins and wires were all removed and should eliminate the periodic limping and swelling that had been happening over the summer.

He has become a very expensive dog – but make no mistake that we love him and would not give him up for anything. He is full of life and character. He makes us laugh on a daily basis. And he is back to being the fearless dog with lightning speed.