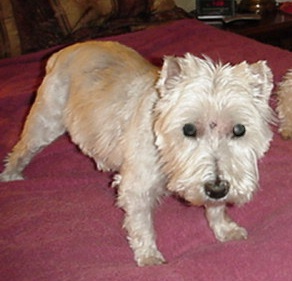 Mac came into the foster program in April 2008.  His owner was very ill with cancer and the wife didn’t want to deal with Mac.  He had been kept at the Vets Kennel off and on for up to two months at a time.  Mac turned 14 years old this month.

His skin condition was very bad.  Poor Mac had several hairless patches on his back and legs.  He was constantly biting his feet and legs.  Mac has several what I refer to as warts or growths on his face and ears and several on his legs.  The Vet has said it’s nothing to worry about but, he does have a face only a Mother could love with his bent ears.  But Oh what a sweet boy.

We offered to foster him here in Indianapolis, IN.  I had him for a few weeks and got him started on meds and a healthy diet.  He was then adopted by a husband and wife (both retired) who lived in northern Indiana.  We felt it would be a perfect situation for Mac.  Bless his little heart, just when he was getting used to his new surroundings off he goes to yet another strange home.

The people who adopted Mac after three several weeks decided that they didn’t want him.  They said he was snapping and growling at them and would stand and stare at them without moving.  It just broke my heart.

So, off he goes again to another foster home in Northern Indiana.  Prospects for Mac are not very good.  His sight is failing, he will be on medication for the rest of his life for his skin condition he has arthritis in his joints…and in true Westie fashion, he does growl & pretends to bite you if you want him to do something he doesn’t want to do.  I say he pretends to bite you because he never actually “bites” he just puts his almost toothless mouth over you.

When his foster Mom in Northern Indiana contacted me again about fostering Mac, I naturally said yes.  He is still here with us and I doubt that he will be leaving to go to another home.

It has been very difficult financially to make sure he has his daily medications but with the help of WestieMed, we should be able to carry on.

We are blessed to have Mac and will love him and keep him safe for the rest of his life.

Thank you WestieMed for helping us make Mac comfortable for what time he has remaining.

I wish I had good news about our little foster Mac boy.  Unfortunately, he went to the Rainbow Bridge on February 27, 2009, with congestive heart failure.

We certainly appreciated WestieMed helping us out financially.  I just wish we could have done more for him.  He was a wonderful Westie.

Mac came into the Rescue Program at age 12.  He was somewhat confused and had some difficulty adjusting to his new surroundings.  But before long he was sleeping with us and knew he was loved and well cared for before he went to the Bridge.

It’s always so hard to find homes for the older Westies.  If only people knew how loving and kind they could be.