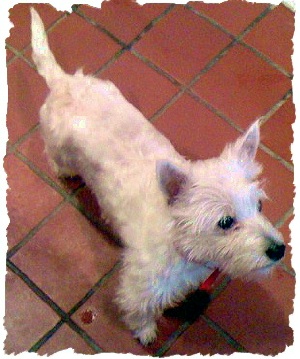 Hope got her name because from the first time someone found her, lying in the street, tire marks on her back, in shock and obvious pain from a broken pelvic bone, “hope” for her recovery was in short supply.

She was taken to the Boone County Animal Shelter in northern Kentucky where she was given some pain meds, but no other medical attention. At just eleven pounds, it had been left to this little Westie to make it all on her own — or not — while shelter workers waited for someone to claim her.  They had to hold her for five long days that way, and during that time Hope wormed her way into the hearts of everyone she met. Her tenacity was incredible, her love of life undeniable. “If I didn’t have so many dogs already, I’d take her in a heartbeat,” a shelter worker said when she called me.

She said Hope could be claimed by Westie Rescue at 8 a.m. Saturday, January 5th, and at 8:10 a.m. I was there banging on the door. By 9:30, she was at my vet’s office, where x-rays showed a badly fractured pelvic bone, one that would require surgery to wire together.

The surgery took place on Monday, January 7th, and it required three and a half hours to put that little Humpty Dumpty Westie together again.  But the surgery went well, and aside from pain pills and antibiotics, there was little to do but wait and allow the bones to mend during a long recovery.

Keeping an 18-month-old Westie quiet is a challenge in the best of times, but for a feisty little girl who obviously felt better day by day, it was a matter of ignoring loud barks and shrill demands for freedom at all hours of the day and night.  Hope obviously felt that she had been crated long enough. There was a whole new world out there, and she wanted desperately to be part of it.

It required patience all around, but eventually, it paid off. Hope’s fracture healed so well that within ten days she was walking almost without a limp and inciting play with my Westies. Weekly trips to the vet confirmed her progress.

During this period, a wonderful couple from Covington, KY, came to see her. They had been waiting for almost a year for just the right Westie to adopt, and when they saw Hope they knew they had finally found her. So on February 9th, five weeks after her ordeal began, Hope went to her forever home here her new family reports that she’s as happy, playful and loving a Westie as anyone could ever want.

Thankfully, WestieMed was there to help cover some of the cost of Hope’s extensive surgery, ultimately making this happy ending possible. Rescue groups such as ours occasionally encounter major cases such as Hope’s, where medical costs far outstrip our financial resources. This means that we are either forced to turn our backs on dogs like Hope because we can’t afford to care for them, or we care for them and then have no funds to care for the next two or three or four who come our way.

These are not happy choices, but thanks to WestieMed we don’t have to make too many decisions like that anymore. As a result, more and more Westies are given the chance to discover the meaning of “hope” for themselves.

Hope is doing great!  She is a happy, affectionate wonderful addition to our family.  She has been joined by another rescue, Wiley, a black point brindle Cairn that we adopted in March of 2009 after losing our beloved Scottie, Shadow, to Crones Disease.

Wiley is about three years old so the two of them are great pals.  They do everything together.  I have attached a picture.

We are great Westie fans.  Hope is actually my fourth Westie and I can’t imagine living without one.  She is the queen of her dominion and lets us know if we are not giving her her due.  Thank you for saving her and ultimately helping her to find her way to us. We are eternally grateful to you and to Carol for bringing us together.