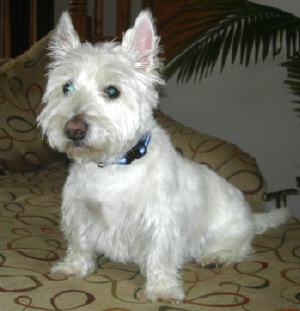 Buddy came to us from the Hobart animal shelter, a little abused from the previous owner, with yet a pleasant disposition. Opening our home again to such a wonderful animal, I knew another adventure would begin as we hunted for that forever home.

During that week Buddy came into our lives we were leaving for vacation and quickly had to find a temporary place until our return about one week later during President’s weekend.

A dear friend of mine helped us. Her willingness to share Buddy with her family until our arrival back put a relief to us all.

After a day of unsettled confusion and yet another transfer to another home, Buddy’s personality changed. A  loss of appetite and a general sadness overcame him.

With us in Florida, Bette contacted me not knowing what his problem was tried to search for some answers knowing Buddy’s condition was drastically changing. At one point he hadn’t eaten in two days, so force-feeding was a temporary remedy that pulled him out of danger until Bette was able to drive through a snowstorm to get Buddy to the Vet Clinic.  With a twenty-minute drive on a normal day, Buddy’s emergency attention was two hours later. His life had been saved. Buddy’s condition was diagnosed as Addison’s Disease.  With the proper monthly dosage, his life will continue as a normal dog and will be happy for the rest of his life.

I just wanted to give you an update on Buddy’s condition.  Once again thank you for your support through Westie Med in providing Buddy assistance on his health condition.

He has been improving very nicely and is just about his normal self.  We are controlling his medication and weight, so the medication does not increase.  I see a full recovery in the next two months.  I have attempted to find a new home for him, but because of his condition and medical costs for the rest of his life, we find it difficult to place him.  He will probably become part of the family.  We have grown to care for him and also working out some of his anger issues from past owners. Poor thing.

I often get very attached to my rescues, so parting with them is difficult  I guess we all share the love for these wonderful dogs.

Thanks again for all you do and hope someday we will meet.

I would like to give you an update on Buddy.  I can’t tell you enough how much I appreciate what this organization does for Westies, and because of that Buddy is living a much happier life.

When Buddy came into foster, he came with many anger issues that developed over a short period.  Because of his aggression, he was not able to be placed into a home because of his unexpected biting and unpredictable behaviors. I knew that he had been abused and would not trust anyone.  As time passed my mother stepped in to see if any changes would happen with a single owner and no small children.  Not only did his anger make it difficult to place him, but medical issues were also of concern.  He was later diagnosed with Addison’s disease.

Buddy today is still with Mom, and still having the anger issues but at a lesser level. Medication is holding for the time being. If it wasn’t for WestieMed I would think Buddy would not be here and probably put down. He is getting older and developing more medical problems, but we will deal with those as they come. I want to thank WestieMed for all your support for Buddy and for giving  him a chance.

With warmest thanks!
Denise Sunkel