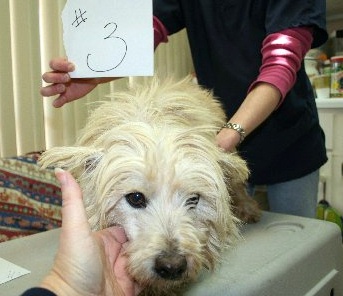 Mackenzie is a shy, scared little five-year-old former breeding male who came to WRT as part of a commercial breeder surrender transport.  Mackenzie had multiple health and social problems (i.e. severely infected ears, skin infection, infected paws, yeast in his ears and paws, hook and whipworms, broken teeth and severe dental disease).  While his health has improved, and he is gaining some much-needed weight, he still is not progressing very much socially.  His new foster parents are working diligently and lovingly with him.  It’s just going to take a long time to get this fella out of his shell.

We believe that because of the help from WestieMed coupled with the outpouring of compassion and care, Mackenzie will one day be a very content little soul.  He will probably never be very out-going.  It could be that too much mental and physical abuse was heaped on him.  We want his new home to be a very quiet environment without any children; preferably with an older, retired couple.  He’s a ways from being adoption-ready, but he’s well on his way, and thankfully, his health seems to be very good now.

Thank you WestieMed for helping Westie Rescue of Tennessee give this precious little dog a second chance at a good life!

There is so much I could tell you about Mackenzie and the progress he has made since we got him on 5/17/08 but I’m afraid I’ll run out of email room.  The first week we had him I was really afraid I had made a huge mistake because all he did was cower in his travel crate and tremble.  After a few days, I told my husband “you know, he’s lived all his life in a cage, so the crate is going”!  We bought him his first bed and put his toys in it — that was the first positive step.  Every day I pick him up (at least a dozen times), pet him and tell him how much I love him.  He now has two baskets full of toys and you should see him looking in each basket and picking out a toy — just like a little toddler.  From time to time his favorite ball will roll under a piece of furniture and he barks (a certain bark) so I will retrieve it for him.

He is so very smart!  I wish I could have gotten him when he was eight weeks old because I could have taught him so many little things. On March 19, 2009, my husband brought home a six-year-old female Westie named Lilly.  Her elderly mom was no longer able to care for her and just wanted a good home for Lilly.  A few days later I was giving her a treat and told her to “sit pretty” and she did.  I turned to Mackenzie and told him to sit pretty and he reared back on his hind legs and put his little front paws up for his treat — just like he had been doing it all his life.  He and Lilly get along so well and you should see them in the mornings together — so happy to see each other.

Mackenzie has learned to snuggle and cuddle and is slowly but surely getting over his fear of riding in a vehicle but I think Lilly has helped him there because she loves to ride!  He also knows how to cop a real attitude and pouts when he doesn’t get his way (which is not very often).

Mackenzie is the light of my life and I pray that all the other rescued babies are as happy as he is.