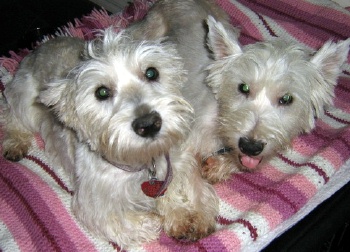 Gilley and Kenna were born on December 3, 2007, in a kennel in Kansas.  Oklahoma Westie Rescue received them through another rescue group on June 28.  It was readily apparent that there was something wrong.  They were certainly frightened but were also more low key than most pups their age.  When we picked them up, our fears were confirmed.  When I placed my hand on Gilley’s chest, it felt like my hand was on a washing machine.  He reached his little head up and gave me a kiss on the nose and I was instantly smitten.  One of our volunteers, who is a paramedic, listened to their hearts and confirmed that both the pups and their mother, who was also released to us, had heart murmurs, though Mom’s was not near as bad as the pups.

Since my house was full, we sent Kenna to Edmond to be fostered by my co-president to lighten the load and hopefully to keep the pups calm.  That Monday, we both took our respective pups to different vets and were both told that they highly suspected that they had PDA (Patent Ductus Arteriosus), or holes in their hearts that should have closed shortly after they were born.

Our vets referred us to Oklahoma State University Veterinary Teaching Hospital.  We made appointments for them and took them together for echocardiograms and a complete physical.  The pups had lab work done, chest x-rays, to make sure that they didn’t have any other congenital anomalies.  The echocardiograms confirmed that they had profound PDA, with no other congenital defects.  We were also told that, without the surgery, they would likely not make it to their first birthday.

When we received that news Kenna was on Theresa’s lap and Gilley was on mine.  Almost at once, they both looked up at us with adoring eyes and we knew that we had to try to save them.

They are undergoing surgery July 22 and, if all goes well, they will be in ICU for two to three and be released to come home to the loving care of one of ours retired volunteers, who can devote copious quantities of attention on them both and nurse them back to health.

Once recovered, their prognosis for a long and happy life is excellent.

Thank you, WestieMed for considering our application for aid and for helping these two adorable Little White Dogs!

A quick update on the pups.  Meredith and I sat on pins and needles most of the day yesterday waiting to hear from the hospital.  OSU finally contacted us twice, once at 2:30 p.m. to let us know that Kenna made it through her surgery and was in recovery and again at about 6:00 p.m. to let us know that Gilley had made it through his surgery.  Both dogs are now recovering and if all goes well we hope to bring them home by the end of the week.  They aren’t out of the woods yet but each day that goes by is a step in the right direction.  We will keep you posted on their progress and we will take more pictures to send as they recover.

Kenna and Gilley are home from the hospital and recovering nicely.  They will be confined to their crate for an entire month and that is going to be hard on them as they are already wanting to run and play.  We have to keep them very still and not allow them to run, jump and play during their recovery.  They are going to be two bored pups!!!! LOL

Attached is a picture of Kenna and Gilley and their surgical team.  On the right is Kenna with her student vet, Hannah who took care of her in ICU and on left is Gilley with his student vet, Cara who took care of him in ICU, in the middle is the surgeon that performed their surgeries, Dr. Ricker and on the far left is Natalie, another one of the cardio dept vets who helped with their care.

This picture is Kenna and Gilley’s recovery crate at Maureen’s house, not their favorite place to be!!  LOL

We will provide more updates next week!

Thanks, everyone for your support for these two little ones!!

Both pups are doing well.  They are really bored so I had stopped by PetsMart and bought them Kongs and peanut butter to go in them.  Hopefully, that will keep them occupied for a while.

Gilley wants desperately to be out and about and he loves to be held.  While you hold him he loves to nibble on your ears!

Kenna is still somewhat subdued but coming around pretty quickly.  She is still quiet but you can tell she is ready to be out of those crates as well.  She too loves to be held. Picking them up and holding is somewhat tricky as you have to be very careful to avoid their incisions and they don’t exactly wait for you to get them in the proper places before they try to race off to go do something fun.

One week from tomorrow, their staples come out and two weeks after that they will no longer be crate confined.  We are all counting down the days.

Above is a picture of Gilley and their foster Mom, Maureen.

As of last week, Kenna and Gilley were released from their crates.  They haven’t stopped running yet!!  Since they were so sick as pups they didn’t play much but NOW my goodness!!  They have about eight months of their puppy life they are now trying to cram into their days.  They run, play, jump in the kiddie pool and run and play some more.

Gilley is vocal, he would prefer to be inside with people and he barks to let you know what he wants in or to tell you that you aren’t paying enough attention to him.  He will stand up on his hind legs to tell you that he wants to be picked up.  As soon as you pick him up he immediately snuggles and licks your ears.

Kenna is a little bit more bashful, she prefers to play with Gilley and is forever jumping on him, grabbing his paws, biting his ears and whatever else she can do to annoy her brother.  She too is loving but is rather bashful about it.  She comes up to you quite shyly and is a little bit timid until you start petting her.

Their spay/neuter appointment is tomorrow and if all goes well they will be available for adoption next week.  Both dogs will be adopted together as we won’t separate them at this point.  They both should live normal happy lives just like any other Westie.  Thanks, WestieMed for helping us give these little ones their lives back!

We have been thoroughly enjoying our new lives with these dogs. They are very engaging, active, and have distinct personalities. They have learned how to go up four steps, go through their dog door and then down four steps to go out to the backyard. Bonnie often goes down balanced on her front feet with her back feet in the air.

Bonnie definitely has a more independent personality and she is very intelligent. We have had to get a crate with a different type of latch because she figured out how to open the spring-loaded type and slip out. She also has learned to climb over a 20-inch freestanding gate and a 27-inch gate. Now, if I’m gone for several hours, I have to put the 20-inch gate inside the 27-inch and so far she hasn’t tried to go over them. With the gates up, they have access to our kitchen area, their food, and water, and can go outside at will.

At first, Bonnie did not want to walk. Now she will walk with Clyde if they are on a tandem leash. We go for two-mile walks some days. Bonnie definitely thinks of herself as a guard dog. At the least little noise, she is halfway out the dog door surveying the territory to make sure things are OK. Bonnie is very jealous when other dogs come to visit, but she is getting better at backing down quickly once she has let them know this is HER home.

Clyde is very mellow. He pretty much lets Bonnie do what she wants. He loves to play and they chase each other back and forth across our back yard at high speed. Clyde loves to meet new dogs and play. Our daughter has an 80-pound yellow lab and a 50-pound black lab. When they come into town, Clyde loves to play like he’s a big dog and they run for hours.

At night, if we are watching a movie, the dogs love to sit on our laps and nap. They enjoy a treat at bedtime when they go in their crate for the night. They still share a crate at night, though during the day they like their separate spaces. If I am working in my home office, Bonnie goes under the desk at my feet, and Clyde is right behind my chair. They are very good companions.

Though they have come to realize that Mom is their pack leader, they love to play on the floor with their Dad at night when he comes home from work.

They have been very healthy-we have only been to the vet for their initial welcome checkup. He was pleasantly surprised that he could not find evidence of a heart murmur in either of them after their surgeries.

We are very grateful to Oklahoma Westie Rescue and WestieMed for these little white dogs. They have enriched our empty nest in ways we did not anticipate.