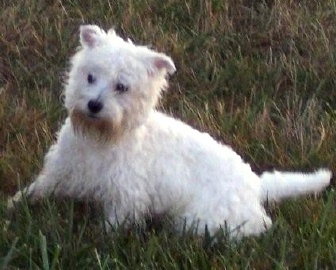 Affectionately known as “Double,” this eight-month-old puppy came to Maryland Westie Rescue (MWR) from a “backyard breeder” in southern Virginia who recognized that he had serious medical problems but surrendered him to MWR because she did not want to spend the money to treat his condition.

MWR brought Double to Greater Annapolis Veterinary Hospital (GAVH) where he was diagnosed with a extra hepatic shunt (a congenital bypass that prevents the liver from filtering toxins out of the bloodstream).

Double underwent surgery on August 13 at Chesapeake Veterinary Referral Center (CVRS) to repair the shunt.  Following his successful surgery, Double returned to GAVH until he was well enough to go to his foster home.  Double is currently in foster care as he awaits his (hopefully final) follow-up visit with his surgeon.

Despite his health issues, Double is a happy Westie who enjoys being around people of all ages and playing with other dogs.  Though enjoying his foster families (and foster Westie siblings), Double is anxiously awaiting a clean bill of health from his surgeon so he can go to his “forever” home.

Double would also like to thank WestieMed for helping pay for his veterinary expenses.

Double goes to work with his Mom at Greater Annapolis Veterinary Hospital.  He was examined by Dr. Kathleen Hersey who said he is doing great!!! He is the same ol’ great cuddler, and love bug he has always been.

He enjoys long walks on Lake Artemesia in Prince George’s County, MD, with his Mom and his sister Callie. He will be getting his haircut again on Thursday. Double is also a therapy dog (something rare for Westies) and goes to Sheppard Pratt Hospital once a week to volunteer with the kids.