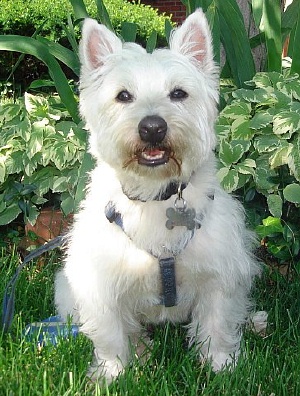 Herman came to Little White Dog Rescue in June of 2008 from his owner whose adult children and grandchild were moving back into her home.

Herman was born on 2/1/2002 and was given to his owner by the breeder, as Herman was the runt of the litter and the breeder didn’t think she could sell the pup due to his size and the possibility that he may not live.

Herman was hand-fed and grew and thrived, and was loved and doted on.  Unfortunately, Herman was never socialized to small children and acted very fearful whenever children were in close proximity to him.  Therefore his owner felt she had no other choice, with a crawling infant moving into her home than to place Herman with our rescue organization.

When Herman was relinquished to our volunteer it was stated that he had previously suffered a fall down several steps and had developed a limp, which when x-rayed by the local vet did not reveal anything broken and he was diagnosed with a sprained ligament.  It was also stated then when taken for walks, Herman did well walking on three legs as he simply picked up the leg that bothered him and hopped along on the other three!  Our volunteer noticed immediately that even when standing on all fours, Herman was not bearing any weight on the left hind leg and was holding the leg approximately 1/2 inch off the ground.

Herman was taken to our vet for another x-ray, then referred to the specialty veterinary hospital, where he was diagnosed with a torn anterior cruciate ligament and surgery was recommended.  Herman received the surgery on August 8th and is now resting comfortably at his foster mom’s home, where he again, is being hand-fed, loved and doted on!  Herman will have two to three months of recuperation during which he is to have very limited activity beginning with only being allowed outdoors on a leash to potty, then gradually working up to slow walks.  His foster mom states that Herman is a NUT about water coming out of the hose and bites the water and the hose, and barks when the water stops flowing!  Of course, all activity is severely limited during his recuperation, but we expect Herman to make a complete recovery and be playing in the hose again in the spring!

Little White Dog Rescue would like to thank WestieMed, it’s Board of Directors, and the many kind, caring people who donate to this worthy cause for helping our group to help Herman.  Because of what you do, we can continue to do what we do…save dogs!

I have forwarded the reply from Herman’s new family.  They are “empty-nesters” so Herman is their constant companion now. Thank you again for the funding to help with Herman’s surgery and for giving him a chance for a new, pain-free life.  We feel very fortunate to have an excellent veterinary surgeon here in Omaha and have had amazing results with the two dogs we have taken to him!

Herman is doing well.  He seems to love it here, he really likes running around in our yard.  We live right next to a park where there are soccer and football teams practicing all the time, so he loves looking out at the people coming and going.  He also loves taking walks in our neighborhood and people always ask to pet him.

We went on a little vacation in July and he stayed at the PetSmart Pet Hotel and he loved it there.

I have attached a picture.  It shows him when he has turned “green” from the grass when it’s just been cut.  He loves to go out in the grass.  The green wears off though, but it sure looks funny!