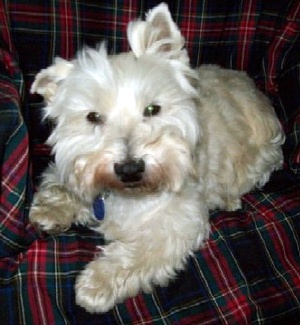 We received a call from the Olympia Animal Shelter in June 2009.   An elderly woman surrendered her Westie because she had sadly lost her home in a spring flood and she had never been able to recover after the insurance and the FEMA assistance and she had to give up her dog.  She could not feed herself let alone feed or vet her dog, so she left it at the shelter.   Sugar had an ear infection and some fleas, and the shelter asked for us to come and get her.  We took her to the vet, and lo and behold poor “Sug” had a plethora of medical issues.  She had a heart arrhythmia, heart murmur, she had arthritis in both back legs and her hip, she had a bad disk in her spine and an infection in her ears.   We did x-rays, sonograms, called in a cardiologist, and cha-ching our bill hit $900 and that was ½ off for rescue price (original bill was $1800).   Alas we sent her to foster care, where she was a bit grumpy, not too affectionate, and her mission in life was hunting and her goal was to kill a cat.  Unfortunately, the foster mom had six cats, and Sugar had to be relocated.

We eventually found an adopter for her.  Nice elderly lady who loved Westies.    Sugar lasted fourteen days and they returned her because she wasn’t affectionate, felt bored, wouldn’t listen, she was very stubborn and very unmanageable and cranky… so off she went back to foster home to chase cats. In August we found another adopter and she kept Sugar for about four days, and found her to be difficult, unaffectionate, stubborn, and as she politely put it … challenging!  Off she went off to yet another foster care.

At this point I was worried and the new foster mom called and said she seems to have something wrong with her vulva, and she is now peeing in the house and poo-ing in the house and licking nonstop.   Off we went back to the Vet.  This time we had to go to a new Vet as the original Vet stopped giving us a discount and was 100 miles the other direction.   The new vet said she had an infection but it seemed she had been on and off antibiotics and she wanted to do a culture to see what this infection was resistant to.  Her urine was too dilute to get a reading for any kind of bacteria.  The Vet also voiced her concern that she could have  kidney stones or bladder stones.

The culture came back with E-Coli infection, she was prescribed antibiotics, and she had to come back in three weeks for a recheck.   After the three weeks, she returned to uncover an underlying Staph infection and off again was the culture (at this point we are at another $800) and she was prescribed antibiotics again and we did a radiograph for stones.  We found none.

By October we were teetering at $1600 worth of bills (after the discount) and a dog who was challenging and no one was “enamored with“ as an adoption option.   Sugar was not very affectionate, she liked to be with other dogs, she didn’t engage with them.  No one was interested in adopting an eight-year old Westie with a heart condition, bad legs, arthritis and a disk problem, and to boot, not an overly affectionate dog.   Sugar’s idea of humans was mostly that they were put on this earth to serve her food, and she loved to be naughty.  She did have a great sense of humor if you liked a smarty pants attitude.  Numerous times her new foster mom just burst out laughing.   Sugar liked mischief, and if you tried to get her stuff, she would challenge you like the “she-devil”.  She would also like to grab your stuff, and run with gay abandon through the house on a wonderful gleeful chase.

Five months into rescue I thought – now what?  I have adopters who only want a dog as a companion who will play with their dog, like kids, go for walks, or is a cuddle bug and wants to be loved.  Sugar met none of the qualifications.   Five months later, and $1800 worth of bills I was very stressed and asked WestieMed for help to offset our cost.   They graciously helped us.

The sun finally shined through the clouds and Sugar is now adopted out on a temporary basis with a former applicant of ours who has adopted a Scottie and two Westies from us over the years.   She has three other dogs, and Sugar is in heaven.  She is in the group, does her own thing, and the owner has a lot of fun chuckling with her humorous escapades.  Her comment is that she keeps the yard free from cats, and squirrels and she takes her job seriously.  Our adopter graciously took Sugar into her home at no adoption fee, to give her a chance at life.  We have no idea how long Sugar’s heart will hold out, but at last, she has found a place to land, and is having a bang up time patrolling the back yard.  Here is a photo of Sugar and her new Mom taken November 2009

Sugar is just fine and happy!   She lives in a cottage by the sea with wonderful gardens.  She has 2 brothers and a little sister.  The attached photo is, left to right: Ferguson, AnnieBelle, Sugar and Henry, on one of their weekly bath days!

When I acquired Sugar, I was told she was a “special needs dog”, but no one ever told her that! Despite her arthritic hips, she chases Ferguson around the house until HE gives up, and he’s several years younger. Suggie has quite a personality, and she’s actually quite funny, although grumpy in the morning when she doesn’t want to get out of bed and I have to go to work.

Suggie is currently on no medications (she did have her teeth cleaned last week tho).

Thanks for doing what you do, helping these little lost souls to have a better chance in life.

Suggie is just fine.  She’s got Ferguson, Henry & Annie as mates.  She has a wonderful life:  food, mates, a safe dry, warm house, a beautiful garden to play in and a Mommie who loves her!

Although Ferguson is about five years her junior, she chases him around and tuckers him out.  He entices a match, she goes for it, he gets tired first.

Suggie may walk funny & have a lop ear, but she doesn’t believe she has any special needs!  I get a kick out of her and I wish she could speak to me, because I also think she’s a very funny dog.