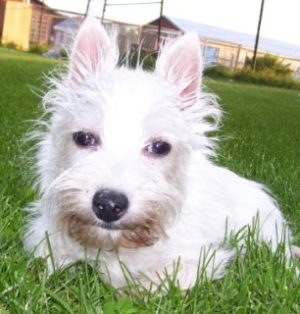 Honey Bun was a 4-month-old puppy who was bred in Ontario by a back yard breeder and then sold to a family when she was eight weeks old.  The family quickly noticed that their new puppy was not eating well and not playing or enjoying life as a new puppy should, so they immediately brought her to the Vet.

Their Vet diagnosed her CMO (Craniomandibular Osteopathy) and they promptly returned her to the breeder asking for their money back.

Craniomandibular Osteopathy (also known as “Westie Jaw”) is a non-cancerous growth along both lower jawbones. Fortunately, CMO is treatable and puppies nearly always fully recover, however, the recovery period is long and quite painful for the puppy till their growth period is over.

The breeder reluctantly agreed to have the puppy returned to her and contacted Westies in Need for help. She asked us to take this little girl in as she was not familiar with Craniomandibular Osteopathy – as a matter of fact, had never even heard of it – and was not willing to pay the inevitable costly vet bills or put in the time to make this puppy well.

We immediately agreed to take this puppy into our rescue, but also felt very strongly that this was a good opportunity to educate her on CMO and to let her know that both the male and female Westie she used for breeding Honey Bun were carriers of this condition and should NOT be used again in her breeding program.

After much discussion and calls from our Vet, she finally agreed to surrender the mom of this little puppy to us as well.  She also agreed to have the male neutered right away, but would keep him as a pet.  The Mom was surrendered into our rescue four days after Honey Bun came in and is now spayed and had some badly needed dental done and is now living a wonderful new life!

WestieMed has been so incredibly generous to our rescue and we could not thank them enough.

Westies in Need is committed to making sure this little girl gets the best care possible and lives a long and healthy life and we could not do it without WestieMed!

Jackie is doing extremely well. We can barely remember the frail little dog we brought back from Kingston in August. It has been amazing watching her grow in character and confidence. She has also grown physically, she is currently twelve pounds and has a healthy appetite.  Chloe and her have developed a wonderful bond and I am not sure what one would do without the other. Chloe really watches out for her little sister and Jackie simply worships the ground her big sister walks on. She is fantastic on off-leash trail walks and we can’t believe how fast she has become. Chloe only has about half a Westie length on her. They run and play like crazy.   She does not show much sign of the jaw pain as she did in August and September. It certainly opens more but is still a little limited. We are hoping to get her off the Metacam by next spring. We will make our final decision upon having X-Rays done in Feb- March to see how the jawbone looks. Jackie has brought a lot to our little family. In the early days of August, she did not seem to even act like a dog. Watching her grow into all her natural instincts and become the thriving little dog she now is, seems nothing short of a small miracle. When I watch her running “hot” laps around the house or yard, the catchphrase  “high on life” immediately comes to mind.

I saw Honey Bun just a few weeks ago.  We had an indoor Westie Play Day-which was so much fun-had 147 Westies come for an afternoon of fun!!!  She was there with her family and she is doing great.  No longer on any medication and looks PERFECT!!