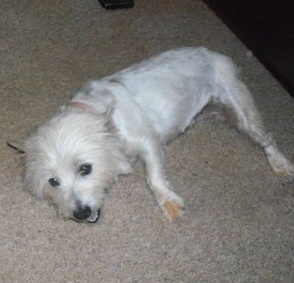 Lillie came to me from Westie Rescue Tennessee where I was to foster her and another dog that came from a puppy mill.  Lillie led a miserable life until she was rescued.

When I saw her, I immediately fell in love with those big black liquid eyes.  Even as scared as she was, she was able to wag her little tail to say that she trusted me.

I did not know much about her history, but when she came to me, she had medicine for her ears as they were pretty messed up.  I religiously put in the drops until she started vomiting and would not stop.  I rushed her to my vet on Friday and Lillie was still vomiting in the vet’s office.  She was diagnosed with a severe case of Cauliflower ears and my vet said it was so bad that she could do nothing for her and recommended I take her to a specialist in Decatur, Alabama.

I carried Lillie to Decatur which was a two-hour drive from my house and dreaded every minute of it as it was going to cost me around $1,200 per ear and I did not have this type of money.  My vet stated that if Lillie did not get the surgery, she would go deaf.  This was not what I wanted to hear and because she is such a precious little girl with a very positive attitude, I vowed to help her in any way I could.  Before calling Westie Rescue Tennessee, I tried to come up with the money for her surgery, but the vet bills had amounted to over $880.00 and I had nothing left in my savings.

Westie Rescue directed me to WestieMed to see if they would help me pay for Lillie’s surgery and they have been very kind as I had no other avenue to turn to and I did not want this precious little girl to suffer any more than she had already suffered.  She was in pain and was constantly shaking her head to the point of blood.

She does not, at this point need the surgery, but the bills and future bills for Lillie could become staggering.