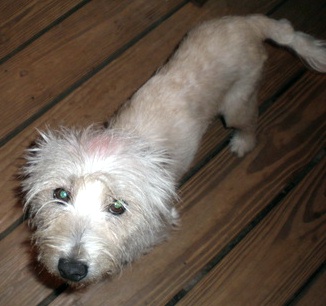 I received an email from the Center Hall SPCA in Central Pennsylvania regarding a Westie that had been brought to them. They wanted to know if our rescue group could take Boomer. This is his story.

Boomer was picked up by a local dog warden near State College, PA. He was a stray living on the streets. He was taken to a local vet and asked to be euthanized. The vet refused so Boomer was taken to the local SPCA.  He was malnourished and underweight. When the SPCA called and asked if our group was interested in finding him a home, I jumped at the chance to help him. He was neutered by a local vet before he came to rescue.

He arrived at his foster home with the Murphy’s a few weeks ago. I took him to my vet for a rabies shot and physical exam. I asked him to look at Boomer’s left hind leg, as I noticed he was not using it when going downstairs. The vet suggested x-rays after the exam. He discovered Boomer had a degenerative hip problem caused by either being hit by a car or being kicked. Also in the x-ray, we could see about 10-12 bb’s. He had been shot many times. To make it even worse the tips of his ears and tail were spray-painted pink as was the top of his head. Despite all this abuse,  Boomer still loves people.

Boomer had hip surgery to repair his hip and is doing well. He is even putting some weight on his leg.

Boomer moved to a new foster home last week due to a very dominant male who did not get along with him. His new foster home had three female Westies and he loved being with them. He bonded with the foster family immediately.  He stayed in this foster home until today. He is the happiest little Westie who only wanted someone to love him and take care of him. Today he went to his forever home in Edinboro, PA.

I am so happy that we finally found the right home for Boomer where he will receive all the love and care he needs to enjoy a long and happy life.

We have a wonderful dog named Spencer.  His name was Boomer.  We adopted him soon after you helped him in October 2010. I’ve attached a picture that I thought you might want to post to show what he looks like now.

I’m sure that he wouldn’t be doing as well as he is now without having had your help.

Thanks so much for all you do.

In October my husband and I adopted Spencer (formerly known as Boomer).  When we first adopted him, he had just had the surgery that your organization helped provide.  He was only walking on three legs.  Our veterinarian discovered that he had developed an infection in the surgery area.  After medication, therapy, exercise, and TLC, he regained the use of his leg.  He is now doing extremely well.  He enjoys taking daily walks along the lake, playing with his fellow rescue Tracy, and sleeping on his favorite chair.  Thank you so much for all that you do.  We are very grateful for the caring people that made it possible for Spencer to live a healthy and happy “second” life.