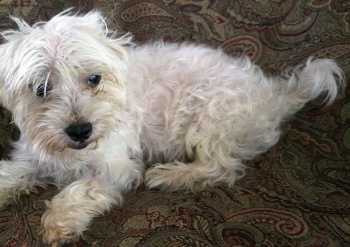 I am an independent rescuer through the WHWTCA.  Blind diabetic Mason fell into my lap one day in late September 2010.  He was abandoned at a county shelter in southern New Jersey, with no information about his history. The shelter easily adopted him out since he is so sweet, only about six years old, cute, and housebroken, to boot.  But when he collapsed a few days later, the new owner returned him.  At that point, a kindly shelter worker, at his own expense, took Mason to a local veterinarian who diagnosed Mason with diabetes. That was when the shelter asked me to take him into rescue, knowing how difficult it was to adopt out a dog with diabetes.

Mason’s insulin dosage has taken some work to figure out and unfortunately, even with a “rescue discount” his expenses have mounted quickly. This was particularly true the first week when the vets and I were still working out what his proper insulin amount was, and Mason suffered one serious “crash” in that time.  Thankfully, diabetes now seems to be stabilized with a modest dose of insulin, and his blood glucose is monitored daily to avoid further unexpected problems in that regard.

But Mason’s medical issues don’t stop there.  He still needs some major medical work, including extensive dental extractions, investigation of whether his sight can be restored, and further examination of some of his other symptoms.  But without all the initial work to get his diabetes under control, these future issues would be out of the question financially, and Mason might not even be with us today.  I am hugely grateful to WestieMed for stepping in with a generous and badly needed financial contribution to Mason’s bills, which allows me to continue caring for him.  He is worth it.  He is a sweet, friendly, well-mannered fellow who doesn’t mind his insulin shots and doesn’t seem at all bothered by not being able to see where he is going. In fact, his favorite pastime is to fling his squeaky-toys up in the air – and then search for them!  While he does that, I continue my search for his forever home: I know there is someone out there who will be able to accept and love this sweet little boy despite his medical challenges.

With heartfelt thanks, I am
Sincerely yours,