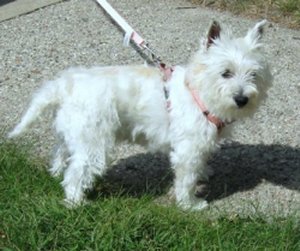 One afternoon in mid-May I was talking on the phone to my daughter that lives sixty miles from me. While we were talking it became apparent that she was preoccupied with something.  Finally, I asked what was going on. She told me that she was watching a little dog, like Skeeter (my Cairn Terrier) over in the neighbor’s yard. She was concerned because there were some large dogs hanging around. She was afraid they would hurt the little dog. Neither of us could sleep that night for worry of the little guy being hurt by the large dogs that were gathering. This is the beginning of Lacy’s story.

The following day I called my daughter and she told me the little dog was still there. Being a volunteer worker for Col. Potter Cairn Rescue, that afternoon found me at my daughter’s home. I needed to identify the little guy. If he was a Cairn I knew they would take him. I couldn’t believe my eyes when I first saw him from a distance. His coat was so matted that the mats hung from him like pieces of an old rug. This poor little guy had been on his own for a very long time. We called him to us with pieces of lunch meat. He would come to within six to eight feet from us and then turn and run from us. It was then that I could see glimpses of white peeking out. I knew then that he was a Westie. For several hours we tried to catch him. Finally, we had to quit for the night. We went to a local store and brought a few cans of dog food and left it out for him. In the morning it was gone but we couldn’t be sure that he had eaten it. There were some other strays in the area. I had a 22 lb. turkey in the freezer so I cooked it and pulled it apart and made little bags of frozen turkey to tempt him with. I was sure that in a couple of days we would catch him. The days turned into weeks, and the weeks turned into months. I found it hard to sleep at night I was so worried that he would get injured or killed before I could catch him. Each time that it would rain I would cry for him outside in the rain. I started calling him “Westie”. So many times I came so close to catching him. Soon all he had to do was see me and he would come for the turkey and treats, but just as I would reach for him he would turn and run.

We started looking for his owner. We made signs and put them up everywhere that had a bulletin board. We even put signs in the library and laundromat. I called three county shelters to see what help they would be. Each told me to catch the dog and then call them. They would hold him for five days while waiting for someone to claim him. Then if they determined that he was adoptable we could pay an adoption fee and take him. I’m so glad that we didn’t do that. They would have most likely have tested him and found out that he had heartworms and determined that he was not adoptable. They would have put him to sleep. That would have been the end of his story. It didn’t end there. Being a rescue person, I had numbers of people that I had talked to about Cairns. Eight people told me if I ever got a Westie please call them. I did, and the first thing they wanted to know was if he was vetted and healthy. Even though he seemed healthy I couldn’t promise anyone that he was, and I couldn’t afford to have him vetted myself. Still, that didn’t stop me. There was a little lost dog out there afraid and alone.

I made three or four trips each week out to my daughter’s home to try one more time to catch him. I sat on the ground with turkey. I even laid on the ground trying to win little “Westie’s” trust. It was now late August and he was still running around. He got to the point that he would put his little feet on my legs, yet any time that I moved he would run. Finally, in desperation I called my sister-in-law and asked her if I could get him…would she take him? She never asked for a clean bill of health. That was all I needed. The next day I was back out there and this time I would make a desperate attempt to grab him. He came to me as he had so many times before. This time when I was sure that he was close enough I made a lunge for him. I tackled him and managed to get a handful of fur. I held tight and closed him into my arms. He struggled against me. I buried my face in his dirty coat and cried. It was finally over. He was safe!  I stayed the night and we handled him and cuddled him.

We were so surprised that he snuggled right in and even sighed and fell asleep in my arms. He somehow knew that he was safe. The following morning I started cutting out his mats before washing him. It took seven hours to groom him. You can imagine our surprise to find out that little “Westie” was not a little boy but a little GIRL.  I called my sister-in-law and asked her if it were alright that he was a little girl…all All she wanted to know was when could I bring her to her. I took “Westie” to her the following day. The next day little “Westie” was taken to the vet. I got a call telling me that she was heartworm positive. A few days later I got a call telling me that “Lacy”, as she was now called, was in heat. I knew then, that no matter what, that rescuing the little Westie when I did was a miracle. Most likely she would have been killed by the stray dogs fighting over her.  I didn’t know what to do so I went online to Col. Potter’s mentoring list and asked for help. They sent me to WestieMed. your organization. We, as Lacy’s extended adopted family, thank you from the bottom of our hearts…sometimes love alone is not enough. This is truly a love story.

Thank you WestieMed. for jumping in to help little Lacy. Thanks to all of you, for because of you, a little Westie whose days were numbered can now look forward to many years of life and love. Thank you and your wonderful group for jumping in and giving her the gift of life. Her nickname is Lacy Love. Once again I really want to thank all of you. I can’t believe how great your group has been. You have all went above and beyond working with me for little Lacy. I wish that you all could see and meet the little charmer. She is so cute and lovable. She really is the perfect little Westie girl…what an attitude she has. She is so full of herself and yet so sweet and loving. I really think that someone knew that she had heartworms and was coming into heat and didn’t want to deal with the expense and bother of the whole thing. Their loss is Lacy’s gain because she is loved so much.

Thanks To So Many,