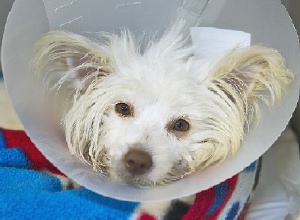 Cat Assistance primarily rescues cats and kittens. We met Cuddlebug, a Westie mix puppy when one of our local shelters called us to see if we could help them.

Cuddlebug is a fantastic young dog that was dumped at the shelter because she was leaking urine. When we saw her at the shelter her white coat was all stained yellow  She is such a great dog so loveable we knew we had to do our best to save her and do whatever it took to find her a home. We took her to our vet and had her spayed. Our vet had told us that even in the cage she was leaking urine.

We were lucky and found her a great foster home and we sent her there in the hopes that the problem would resolve. Unfortunately, the foster home called us a few weeks later and told us she was still leaking urine. We took Cuddlebug to a specialist and found out she has a congenital condition called ectopic ureter that needed very specialized and costly surgery.

We were able to raise some funds to get the surgery done but we did not count on the complications. Cuddlebug had a massive infection that affected her kidney and she needed to have a second surgery to repair the infection. The infection was so bad that we had to make a decision whether to remove her kidney or repair it and hope it would be OK. We made the decision not to remove the kidney as she is a young dog and a real fighter. She was in the emergency vet hospital for ten days even though we originally were told she would be there two to three days.

She is now doing well and we are hopeful that she will make a full recovery.

WestieMed has been so generous to help us with our vet bills to pay for Cuddlebug’s surgery. Without their generous support, we could not have saved this great dog.

Cuddlebug is now renamed Coco. Thanks for your support.

We really appreciate your support!
Here is a photo of her going home after her surgery.

She is doing great adopted by her foster home and they love her!