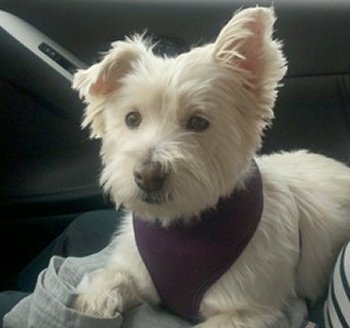 We rescued our Maddie after suddenly losing our Sophie July 17, 2011. Sophie was also a rescue, a little angel we were blessed with for eight years and adopted through Westie Rescue of Missouri. Sophie spent her first four years in a horrible puppy mill. This past winter she developed some lung issues and suddenly in July they became much worse and she also had a gall stone. We tried desperately to save her but finally had to let her go. Maddie was with a “breeder” for her first seven years. Westie Rescue of Missouri rescued her in February 2011 and was placed in foster care in St. Louis then until we adopted her in July. A few weeks before Sophie passed away I happened to come across a poem I had printed off a few years back. It spoke as if written by a “little rescued soul” instructing it’s owner to save someone else’s life after they were gone. It thanked them for the loving care it received and wanted it to continue with another one in need. It was like Sophie was preparing me for what was to come.

So two weeks after Sophie left us we traveled to Kansas City to receive our next little angel, Maddie. Her foster mom, Kelly, traveled on a Sunday, to hand Maddie off to another Westie Rescue of Missouri volunteer who then transported her to their home in Kansas City. We then were able to pick her up there and fell in love with that sweet face immediately.

I felt so badly for Maddie to have lived in a loving home with Kelly and then be handed off to another stranger and then to more strangers who traveled with her to Iowa. How confused she must have felt. Just when she must have felt safe and secure to have everything turn upside down for her. We were lucky to have two weeks of vacation to bond with her and help her become at ease. So a couple of days after returning home I took her for a check-up at the vet. She found a tumor in her mammary gland and did a needle biopsy immediately. The results came back the following day and it was suggested strongly that she have surgery to have it removed immediatley. So the following day Maddie had her surgery. I felt so awful for her to have to go through such trauma with her new family so soon after joining us! She must have wondered what in the world am I in for with these people!! Maddie was able to come home that evening and then we endured many nights of worry about what the results would be from the tumor that was removed… cancer or the all-clear. Each day seemed to drag on and on, but Maddie always seemed to have her sweet spirit! She is a real trouper and she was teaching us to be that way and no matter what the outcome we were there for each other!

Finally, the call came and our vet told us just what Maddie deserved to hear, “all clear, WE GOT IT ALL! NO CANCER!!”   Maddie does not have to have any treatment but we do continue to monitor her to make sure nothing else “pops up”.   She has become so attached to us and we to her. Our two Westie boys, Kody, and Kutter, have taken her in like she has been here with them for years. She is simply a sweet little angel, so trusting and so playful and of course, a little bit of Westie mischief is in her too! I wouldn’t want her any other way!

Thank you so much for the help we received for Maddie’s surgery! We are so grateful for your help with our little Maddie!!!
Julie and Chris Boyles

Maddie is doing awesome!!! She is such a sweet, sweet, loving, little Westie!

She is very frightened of thunderstorms so she and I spend time in the lower level of the house with the TV up loud and pacing the floor. She does have a thunder shirt that she wears at those times and she also takes “puppy Prozac” which has helped calm her anxiety. I was concerned about how she would do with the fireworks this week, but we stayed inside in the basement with the TV going and she didn’t hear a “pop” or a “bang” at all!!

Her last checkup at the vet was in March and she got a “gold star”. We have been working at taking off some weight and when the weather wasn’t so stinking hot, I got her to go on walks with her brothers, Kody and Kutter. She isn’t quite comfortable going out on her own without them, but with them, that little tail just about wags her backside off! She really loves it! Last night I gave the kids baths thinking that would cool them off even more in the heat. Once they were all done with the baths, they chased each other all around the house and out in the back yard and had such fun! My husband, Chris, and I just watched and enjoyed the “show”!!

I’m not the best at doing “computer stuff” but I will try to send you a picture of her from my phone. Above is one of her in her thunder shirt that I took when she came to work with me one day. She is a real sweetheart.

Thank you so very much for your assistance last summer!!! Maddie is such a wonderful, loving, little girl! She makes me smile just thinking of her face and that “floppy” ear of hers!