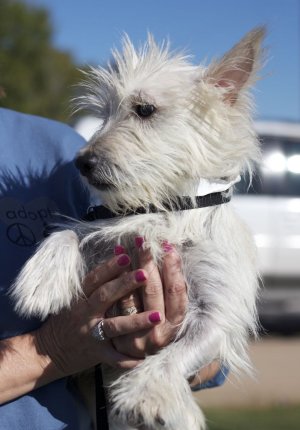 It was almost a year ago when we were contacted by an elderly gentleman named Mr. Gatlin.  He was a lonely man that had shut himself off from the world, including his family, and lived his secluded life with only his dogs.  But his health was now failing and he knew that if something happened to him, the county would take his beloved dogs.  Our county shelter is a very high kill shelter and he was desperately seeking a no-kill shelter to help with his pets.  So on our first trip to visit Mr. Gatlin, we were prepared to take some of the dogs then. But sadly, he just wasn’t ready to part with his “little buddies”.  Mr. Gatlin’s home was in very sad condition.  Maybe in his younger days, the dogs were kept better.  But he was in no way able to take proper care of them now.  There were dogs everywhere.  We could not even get a total count.  His property had been divided into lots using anything that he could find that would work as a fence.  There were old cars, furniture, garbage, farm equipment, overgrown foliage, and two mobile homes that housed most of the dogs.  There was no grass, just dirt and many of these dogs were hairless from flea infestation.  I could tell he was ashamed and embarrassed.  He kept apologizing to us but still in his mind he thought he was taking good care of his “little buddies”.  At that time, there was one mother dog and a litter of six babies.  They were inside one of the trailers.  We asked to see the babies.  He brought out a tiny, six weeks old Westie.  It was covered in fleas and its gums and tongue was so pale.  I tried to explain that this baby was critical and we begged for the puppies and almost had him convinced.  But at the last moment, he took the puppy back and said, “another day”.  We were told later by his sister that all of the puppies in that litter died.

Even though he would not release any dog to us on that day, we did make progress.  We had carried forms giving Peace, Love, and Animals full custody of all of his dogs should anything happen to him, either death or illness.  Mr. Gatlin gladly signed these forms and copies were left with him to post plainly on his property.  So we left to wait until “another day” when he was ready.  We tried several times to contact Mr. Gatlin in the months that passed, but no luck.  So we waited.

“Another day” finally came when Mr. Gatlin had been hospitalized for his heart and returned home to find some of his beloved dogs dead.  This was the turning point for him.  He knew there would be several more trips to the hospital and he could not leave his dogs again.  When we got the call to come to get the dogs we did not know what we were in for.  We just knew we had to be gentle with Mr. Gatlin and gentle with his dogs.  We were the first humans that they had ever seen other than him.   So we gathered our crates, towels, and volunteers and prepared with a group discussion.  This was a first for our rescue.  This was a real rescue.  To go into a hoarding situation with feral dogs, filthy environment, and trying to catch these poor babies without causing too much stress, is unbelievable.  When all was done, we were peed on, pooped on, scratched, bleeding, fitly, and smelled really bad, but we had rescued thirty-three Scotties and Westies.  Job well done.

Once back at our rescue, the baths began.  These poor dogs were so covered in fleas!  Once they were clean, a good warm bed, a full tummy and tucked in for a peaceful night’s sleep. Tomorrow starts a new day.  All of these dogs were taken to our vet to be checked out, vaccinated, heartworm tested, and spayed/neutered.  Many of them tested positive for skin yeast, skin infections, Demodex mange, and a heart murmur.  Most were handling treatment well until one day I noticed this one little guy acting a little strange.  This was the day before he was scheduled to be neutered.  He was not perky like he usually was.  Most Westies are usually very happy guys and he was not acting his usual self.  The next morning, he started staggering.  Now I knew something was wrong.  I took him on to the vet so they could check him out.  He was having a reaction to the Ivomic.  Poor M-3 (we now call him Marty).  He ended up staying two days in the hospital.  After recovering from the reaction, we had to change his medication and two weeks later, he was scheduled for neutering.  On the morning of his neuter, he asked the vet to check out his back leg.  I had noticed that he “carried” it a lot.  One of his brothers had an issue where his knee would “pop out” so I thought Marty might have the same problem.  Maybe his had popped out and had not gone back in.  After his surgery and Xrays, Marty’s real problem was discovered.  Sometime in his past, there was a tragic accident.  Maybe he was hit by a car, we will never know, but his hip is severely injured and requires major surgery.  Until then, we are trying to keep him comfortable with pain medication until he can have that surgery.

Of the thirty-three Scotties and Westies that we rescued from Mr. Gatlin, we reached out for help with these dogs.  This was more than our little rescue could handle along with what we already have.  We contacted the National Scottish Terrier Rescue and Westie Rescue of S. E.  We kept Marty and two of the oldest Scottie females.  We stay in touch with these rescues and are enjoying getting the “happy tales” and pictures as they are getting adopted.  It was an experience we will never forget.  Mr. Gatlin’s dogs stayed with us for three weeks before going on to other rescues.  Even though they were feral dogs, in just days, they accepted us and warmed up quickly.  Mr. Gatlin was trying the best that he could but these dogs were starved for attention.  Marty is a very sweet little guy and I know that once his hip is well, we will have no trouble finding him that perfect forever home too.

My name is Naomi.  I just wanted to give you a happy update about the best westie ever!! My husband and I lost our best bud, a thirteen yo shepherd mix named Sammy, last August. We wanted another friend for our lab, and Tai, a foster mom, was gracious enough to allow Marty into our lives.  I strongly believe in rescue, especially since I found Sammy in a dumpster when he was a tiny baby and our lab Bailey was an abandoned stray who decided she liked our yard best 🙂

The best news is, although he’s a bit timid still, Marty (now Walter) is getting more confident every day and loves his big sister.  He’s up to normal weight and my groomer adores him.  He’s so precious and handsome, and a very funny little man.

Thank you with all my heart for saving his life.  He has helped us all heal and I am so proud of his improvement in the few months he has been here.

Please let me know if you have any questions.  Thanks again 🙂