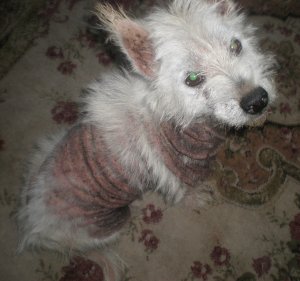 My name is Spencer. It was about a year ago when my parents decided to surrender me to Westie Rescue of North Texas. I had started scratching and lost most of my hair to something they called allergies and my parents couldn’t afford the dogtor bill.

I was pretty scared about being with new people, but Aunt Melanie and Uncle Paul made me comfortable. I have been living with them for about a year now. I have one foster sister and four foster brothers. They have all made me feel at home and we get along great! Uncle Paul calls me Roonie, kind of short for Spenceroonie. I guess he calls me that ’cause I like to sing and it sounds like “rooo roooo”!

Right after I moved in, I met a great dogtor. His name is Wes Taylor and he loves us Westies! I got a lot of my hair back, but Dogtor Taylor says that I’m not out of the woods. I still have a setback every now and then. I’m on a special diet that tastes pretty good, but I wish I could just get well. I take a bunch of medicine: Cyclosporine once a day, Fluconazole twice a day, and Temaril-P every two days. Uncle Paul and Aunt Melanie give me a bath every three days with Douxo Chlorhex PS Shampoo. Since I had my last setback, I’ve been getting my ears cleaned with some cleaner from Animal Dermatological Laboratories and I use Otibiotic Ointment from Butler Schein.

Most of the time, I feel pretty good. I have a special bed to sleep on and a couple of special places where I like to nap. I potty outside and I love people! I go to the dogtor every three or four weeks and I like to meet everybody. I have a special seatbelt for the car and I love, love, love to ride! I get along great with my foster sister and brothers and I have one special friend. Last summer, my foster sister Lizzie had a puppy named Sugar. Aunt Melanie and Uncle Paul’s daughter Stephanie adopted Sugar and she comes to see me every now and then. We are best buds and we like to play tug o’ war! Sometimes though, I just have rotten days because of my allergies. Uncle Paul calls them cooties. I do feel a whole lot better than I did before WRNT took me in!

I’ve been to a few adoption events that WRNT has had, but it seems like nobody wants me since I don’t have all my hair back and since I have to go see the dogtor so much. It’s kind of sad for me sometimes, but I know that Aunt Melanie and Uncle Paul love me ’cause they take such good care of me. One day I’ll have a forever home, but I’ll always remember the love that WRNT and WestieMed gave me.  Thank you WestieMed for approving the funds to help take care of me.

Hello from Spencer and Paul. We want to tell you about our trip Thursday to Animal Dermatology Referral Clinic where we met Dogtor Reid Garfield. Spencer has asked me to compose the message as he relates it to me. He had a wee dram of anesthesia and was cautioned about operating machinery or independently making critical decisions. In case I commit one or several hundred literary faux pas, please recall that my nickname for Spencer is Roonie.

Spencer came under the care of WRNT on 8 November 2010. He was surrendered from his Southlake home because of severe allergies and hair loss. With the exception of a couple of days, Melanie and I have provided foster care for Spencer and continue to do so. Spencer’s primary veterinarian has been Dr. Wes Taylor at Highlands-Eldorado Veterinary Hospital Dr. Taylor has been treating Spencer for nonspecific allergies.  Other than hair loss, symptoms include incessant itching and scratching, skin lesions, and the intermittent presence of staph, yeast, and bacteria on the skin and in the ears. During the course of treatment, Spencer’s therapy has been adjusted only slightly. Prior to Thursday, 3 November, it consisted of the following:

From November 2010 until May 2011, Spencer’s condition gradually improved and he regained approximately 80% of his coat. However, in June of this year, he quickly became and remained symptomatic, again losing a large percentage of hair.

At this point, Dr, Taylor ordered a thyroid panel and senior screening, but there were no anomalies detected. With the exception of changing from Ketoconazole, 200mg to Fluconazole, 100mg in June and in October adding a 21-day course of Cefpodoxime (Simplicef), Spencer’s meds remained unchanged. Additionally, allergy testing to this point had not been performed. At our September and October appointments, Dr. Taylor was away on speaking engagements, so we relied on two different visiting veterinarians who were covering for Dr. Taylor, both of whom had different opinions on Spencer’s condition than Dr. Taylor.

Needless to say, we were now at the point of much frustration and heartbreak because nothing that we were doing seemed to give Roonie any relief from constant itching and lesions. Fortunately, Dr. Garfield entered Spencer’s life on Thursday. We both liked him instantly, and he spent a very thorough 30 minutes talking with us and examining Roonie. Dr. Garfield collected several slide samples and after studying them made a preliminary diagnosis of Immune-mediated skin disease. He explained that by saying that basically, Spencer is allergic to himself. From Dr. Garfield’s report:

I did notice a slight change after one day of the new therapy. Roonie has always been a happy boy, but yesterday, he showed signs of being happy all day, and his itching seemed to have decreased slightly. Some of that observation is probably due to wishful thinking on my part, but I do look forward to receiving the pathology report from the biopsies. It seems that there may be light at the end of the tunnel.

Please know that I respect Wes Taylor as a doctor and that personally, I enjoy his company and conversing with him. Also, please know that I am in no way suggesting that Dr. Taylor provided anything other than top-quality care for Spencer.