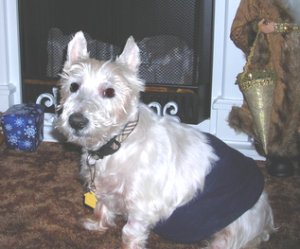 It was last December when I lost my beloved Westie, Teddy.  He was the light of my life, my best friend and confidant.  Not a day goes by that I don’t miss him terribly.

Knowing it was probably time to move forward after my loss, I considered bringing a new best friend into my life.  At the encouragement of my brother Tom, I decided to browse the local Humane Society’s website.  There, I found a familiar little white face:   A ten-year-old Westie, surrendered by his owner four days before he was to be euthanized and all because he’d started to have accidents in the house.  Thank goodness the veterinarian at the shelter was able to convince the owner to sign Mac (then Skipper) over to them.   (It’s not very uncommon for an unneutered male to have problems of this type.)

Making it a point to visit Mac at my first opportunity, I was instantly smitten as he sauntered over to greet me.  Consulting the vet on staff, I was advised of Mac’s ear infections and skin allergies.  My beloved Teddy had had both of these conditions at the time of his adoption, and neither was ‘the deal-breakers’.  We proceeded on the assumption that his enlarged prostate, a result of never having been neutered, was the likely cause of accidents he’d been having at home.  I was sure time, love and understanding would turn this situation around.   After making a final decision to adopt, Mac was neutered; a few bad teeth were pulled, and his ears medicated.

I wanted to tackle any problems Mac was suffering from as soon as possible, so I made an appointment to see Dr. Campbell the very next day.  Chronic ear infections were confirmed, while blood was drawn to get a baseline on his condition.   Dr. Campbell agreed that Mac’s enlarged prostate was the likely cause of his indoor wetting, so it appeared that having him wear a diaper while waiting for his prostate to reduce in size was the appropriate course of action.  Allergy medicine for his sneezing and a diet of lamb and rice in conjunction with a special shampoo were recommended to promote a healthy and beautiful white coat.   Mac didn’t fight to wear a diaper, so waiting for his symptoms to disappear was just a matter of time or so I thought.

On Mac’s third visit to Dr. Campbell, a month after he arrived home, there seemed to be no improvement.  At home, outside his urine stream continued to be very weak.  The doctor suggested an x-ray and I agreed.  When Dr. Campbell returned, he said, “I have good news and bad news.  His ears are much better but he has bladder stones.  Unfortunately, they’re not only in his bladder, but several are blocking his urethra as well.”  My heart sank.  He continued, “It’s like trying to pass a grapefruit through a straw, so they’ll need to come out.”  The thought of Mac’s pain made me wince, and at that moment I knew I couldn’t let him down.  Mac was helping me get past the loss of Teddy, so I had to return the favor.

With the help of such a wonderful organization like WestieMed, Mac was able to have his surgery and did very well.  The doctor sees no reason why he won’t do just fine now.  A bumpy start to our life together, but kind people who seem to watch over us help to pave the way.  I believe people do watch out for us; the nice folks at WestieMed, my Teddy from up above and brother Tom.

Thank you so much for your help.
Sue and my new best friend ‘Mac’

Mac is doing great.  He has fully recovered from surgery and has quite a spring in his step for an eleven-year-old (or around there).  He is a wonderful companion and I silently thank that silly man that brought him to the shelter all those months ago, definitely my good fortune.  I’ve attached a picture.

Sue and Mac (my little angel)

This past November Mac and I celebrated our one year adoption anniversary. He is doing just fine thanks to the help we received from WestieMed and the skill of Dr. Campbell.

Mac has been a blessing from the day we found each other. From helping me work through the loss of my beloved brother (Mac was my brother’s gift to me). Before his passing he had encouraged me to find “the best little shelter dog” to bring home, he didn’t want me to be alone. Mac has certainly fulfilled that role, a big role for a little dog. To recently, being by my side through the worst storm ever known to my small town in New Jersey. Mac provided comfort and courage through a terrifying experience. ‘Courage’, nothing new to the little terriers we love so much.

Thanks for checking on Mac, thanks I truly can’t convey with words.

Always,
Sue and Mac (Thanks Tom)