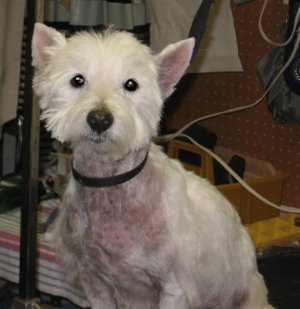 “A190738” was the subject line of the email I received on Oct 25th from the Rescue Coordinator at San Antonio Animal Care Services.  She’d come in on Oct 20th as a stray, but the coordinator had been out and since she wasn’t properly classified as a Westie, I didn’t receive any alerts.  She was scheduled for euthanasia on the 26th, but the coordinator put a hold on her until she heard from me.  When I said we would take her, ACS named her Pasadena and scheduled her vet appointment.

I was out of town on business when Pasadena was released, but one of my volunteers picked her up and transported her to her new foster home where she has lived since Nov 1st.  She had severe ear infections which we’ve cleared up, but she is partially or completely deaf.  She is heartworm negative, but positive for 2 tick-borne diseases which we are still treating with antibiotics.  She’d lost all of the fur on her legs and underside from a yeast infection, but we’ve cleared that up too and little tufts of white fuzz are starting to grow.

Dena, as we call her, is estimated to be about ten years old, but she’s a real sweetheart who enjoys her walks, other people and dogs, and has a lot of spunk left.  It will be a challenge, but we hope to find a good home for her with a Westie lover who has a big heart.

I wanted to let you know that Dena was adopted this weekend.  She is still partially/mostly deaf, but we cleared up her ear and skin infections and she’s got about 1/2 inch of fur on all of her old bald spots.  The woman who adopted her just lost Max, her 15-year-old deaf westie, so she was fine with Dena’s age and hearing problems.  Her story has a happy ending and we really appreciate your assistance.

Dena is doing well!  She is now called Millie, which is short for Millicent.  I’ve seen a recent picture of her, but don’t have it myself.  I’ll ask her owner to send it to me and will forward it to you when I get it.

I’m currently out of town, so it may take a couple of days, but you’ll be hearing from me soon with a picture.  I appreciate the generosity of your organization.

She has a beautiful coat now and no problems with her skin.

She’s still deaf (mostly), but also practices “selective listening’ according to her owner.  🙂

I’ve attached a new picture of her.

Thanks again for helping with some of her bills.