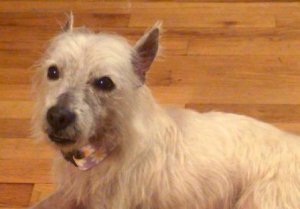 Wilson was found by Animal Control in Liberty State Park in Jersey City, NJ on September 26. Ten days later, in response to the shelter’s plea for a rescue to take him, I went to pick him up. Wilson had bad timing as this was right before Montgomery and all the other show people who do rescue were unavailable.  I was not sure that I was ready for a dog as sick as Wilson reputedly was, but it was clear if I didn’t take him, nobody would. So I headed over to one of New Jersey’s most grim, underfunded shelters to meet my new charge.

When I got him, Wilson was so sick it was truly frightening, and so I took him straight to my vet.  Upon seeing him, the vet confirmed this was exactly where this very sick little dog should be and felt he should stay there for a few days.  Wilson received intensive care and repeated observation for five days, which helped enormously in diagnosing his various problems: severe starvation/emaciation (weighed nine pounds when he was found), raging Giardia, Coccidia, worms, Malassezia, secondary bacterial skin infection, ear infections, and eye infections. Due to his Malassezia, he had lost a lot of hair and smelled like yeast; due to his horrid living conditions (apparently he was living as a feral dog) and bad health, he smelled like urine. Due to his sickness, he was unable to eat normally; he had no appetite, refused almost all food, ate only small amounts of what he would take (I fed him by hand during this time), then regurgitated most of it. Each time, I would clean it up, and try again.  He slept almost constantly and I gave him the softest beds I could find since he was so thin that he could not comfortably sit or lay on a hard surface. On top of that, he was withdrawn and depressed. The vet estimated this little guy was just about five years old.

Gradually, Wilson began to recover. The first milestone was when he could eat food without the obvious pain that it first caused him, and when he was able to keep things down without regurgitating. Since his medications were all oral, this was a critical step in his recovery.  Whereas he could initially only handle chicken and rice, eventually, he was able to eat dog kibble, and eventually began to put on weight.  With the help of frequent medicated baths, he started to grow some hair back. Emotionally, he had been damaged too, and seeing the rehab from that was even more touching than seeing the physical issues resolve.  While he still was not comfortable anywhere except in his pen, he began to come out of his shell, seemed to start to enjoy being patted, and even started to make eye contact with me after about a month.

Now, three months into rescue, Wilson has made amazing progress. He shows great affection for people and other dogs; he enjoys walks and comes to me to get patted and even lets me hug him which he would not tolerate initially. The vet was amazed that his ear infection, which was so bad the vet feared he would be deaf from scarring, has completely resolved.  His skin had cleared up nicely and the odor almost is gone.  Once he was well enough, he was neutered.  That operation was a little scary since his pulse went so high, but he made it through. The dental cleaning done at the same time showed that while he has no enamel left on his teeth, at least none needed to be pulled. Wilson needs regular tooth-brushing though, for the rest of his life.  Wilson is still waiting for his forever home to come along, but he is safe and sound in the meantime.

I am deeply grateful to WestieMed for the critical help it provides.  I decided to start rescuing after I had been showing and breeding dogs for a year or two and thought, well, if I am going to bring more dogs into this world, I’m going to help the ones who are already here.  As an independent rescuer, I receive no funding from any regional club and no donations other than the modest adoption fees which rarely cover the medical care that rescued dogs need.  I rescue dogs “part-time”; generally, one at a time.  I spend a great deal of time on the phone with potential adopters, advising them on the perils of buying badly bred dogs (many, I find, are considering a rescue dog as a cheaper alternative to a pet store purchase) and helping them identify quality Westie rescue groups. While it feels like a very small contribution to the welfare of dogs in need, as they say, “it is better to light a single candle than to sit and curse the darkness”.  I see myself as lighting single candles, one by one, for Westies in need.  I have found how gratifying it is to be able to rescue dogs, even on a small scale, and I greatly appreciate the opportunity to play a role in these little miracles that WestieMed makes possible.

Attached is a picture from April 2012, the month we adopted Wilson from Lisa Curry. The other picture is from January 2013 where Wilson is enjoying the warmth of a wood fire on a cold day.

We got about six inches of snow last weekend and Wilson had to confine his outside duties to shoveled paths/driveway, but by the second day the snow had compacted a bit and his short legs were able to break through the snow to the ground allowing him to bound along through the open snowfields. He was very cute there, and about everywhere else. He is allowed on our property off the leash and seems to enjoy the freedom, but it makes him a less willing walker on a leash. We are on a private access road so he doesn’t have access to a road with traffic on it. We also supervise his outside times, and somehow seems to know where our upper property ends, he never leaves that area even if he is in hot pursuit of White Tail Deer, yes they are frightened and bound away, off into the woods and Wilson stops at the end of the mowed areas.

I think Wilson is doing well and we continue to learn how to deal with his sensitivities to food and other possible allergy reactions. He has a regular veterinarian was he has been examined and resulted in us having an abscessed tooth removed. This relieved him of pain, we believe. With help from Lisa we selected a grain-free, limited ingredients sweet potato/fish kibble for his basic food.

I continue to work on developing trust and obedience that allows me to groom and trim nails…progress is being made. He will nip and fight back. I have used a Dremmel drum sander on his nails one foot at a setting, and not all the way down on each nail. He is somewhat comfortable with that maybe due to his familiarity with a hairdryer after a bath. He is quite reasonable about taking a bath. The Dremmel and hairdryer are perceived mostly by the vibration, not hearing as his hearing is very poor – not an effective watchdog but boy can he bark, sounds like a much larger dog.

He seems to be very comfortable living here and with us.

Wilson was in for surgery on October 14, to remove a sizable growth on his left cheek and a smaller one on his neck. Attached is a picture of that event. While there he was again diagnosed with Yeast problems and has been on Ketoconozole tables each day and the ear medicine now only his left ear. His feet and legs are about back to normal with hair and while he continues to like to lick, he is not licking his feet and legs, they must have itched.

The vet also put him on a very strict prescription diet by Hills Z/D, it has only modified protein and we have even stopped using HeartGuard as it has a beef flavor. He is not one a topical heartworm med, forget the name.

If we can identify a food allergy we may be able to get him off of prescription medications such as ketoconazole, albeit we’ll continue it in his bath regiment. I have the approval to give him baked potato (microwave) and white rice with nothing but the cooking water. He likes those as a treat, and does okay with the prescription kibble, he liked the salmon and sweet potato much better, I also used a canned salmon to add interest…hope he can eat fish in the future.

I am beginning to think Wilson may have been abandoned by a family in the city area who simply couldn’t afford to treat him, and was ashamed of his condition to the point of not taking him to an animal shelter – he may not have been in Liberty State Park long before animal control picked him up. This guess is not important but reflects our affection for him and wondering about his earlier life. He has many “family dog” characteristics, he was not simply a “puppy mill” caged breeder.

Hope your good work helping our dog friends is going will, you remain in our high regards for your good work, and some even for non-Westies : ) which is a lovely breed I have come to believe, albeit they are a Terrier!