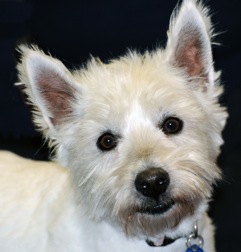 Eddie was surrendered to the Nebraska Humane Society in January of 2011. His owners noted that Eddie would cry and yell when being touched around the hindquarters.

The Humane Society ran labs and x-rays of his hindquarters to find the cause of his pain, but his tests came back normal at that time.

Wag n Train Terrier Rescue was contacted and Eddie was taken to his new foster home on January 8, 2011. On January 13, 2011, Eddie was seen at Rockbrooke Animal Clinic to try to help locate the source of his random pain. Two types of x-rays were taken, as well as a thyroid test.

Eddie’s pain became more frequent and he was taken back to Rockbrooke on January 24, 2011, he was given a steroid shot, an anti-inflammatory, as well as some pain medication. Eddie was put on restricted exercise and was on medication twice daily to help reduce the random bouts of pain.

On February 8th, 2011, after many weeks of testing and another set of x-rays, Eddie was diagnosed with Intervertebral Disc Disease syndrome. The x-rays showed deposits of calcium were building up between some of the spaces in Eddie’s spine, a few spaces in the neck and a few in the hip area, that will act as a pinch on his nerves during random movements. The diagnosis of intervertebral disc disease syndrome has changed things dramatically for Eddie.

Wag n Train Terrier Rescue and Rockbrooke Animal Clinic are working to provide Eddie a pain management program using medications, medical procedures, and alternative therapies including acupuncture. We are sure by maintaining this care, he will live a long and happy, relatively pain-free, life.

Eddie had his second acupuncture appointment.  The first appointment, Eddie was screaming (like a 5-year-old child at the ER) and was knocking out needles every few minutes.

This time he sat nicely on the table, panting since he does still have pain.  We did not have to replace any needles and he also got some electrotherapy.  Laser therapy is his favorite as it ends his acupuncture session and is a warm massaging sensation.

These sessions are really benefitting Eddie.  He has more energy, less pain, and better movement and has a better disposition.  He has another appointment on Friday and I expect him to get better and better as we continue.  This is a great therapeutic way to help Eddie, and I enjoy the soothing music as well. LOL.

Eddie has been going to acupuncture for four weeks now.  I am happy to say that he picked up his first toy today.  He has officially started to act like a Westie.  Yesterday he barked and ran the fence to chase a squirrel!!!!  I wish my camera had been in range when all of this happened.  It’s great to see him start being a Terrier.

In the spring of 2011, our group applied for and received a WestieMed grant for Eddie, a five-year-old Westie with random pain that our vet diagnosed as invertebral disc disease.  The grant allowed us to pursue acupuncture and laser therapy for Eddie, alleviating his pain and allowing him to live without medication.  Eddie has made such progress with his treatments and was able to jump on the furniture and navigate stairs with no problem in his foster home.  Eddie also learned many tricks and commands from his foster mom who posted a YouTube video of him performing on our FaceBook page. The happiest news of all is that Eddie was adopted yesterday and will be the beloved family member and cherished companion of a twelve-year-old boy, who was also adopted. We wish Eddie and his new family many years of love and happiness and want to also express our gratitude and appreciation to WestieMed for the financial aid to help Eddie live a normal, pain-free life.