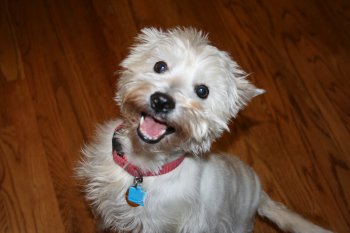 Sweet little Kate came to Westie Rescue Southeast in October 2010.  Our friends at the Tuscaloosa, AL Animal Shelter called to tell us of a little Westie girl that needed a rescue to take her in.  Kate had been dropped off there with another family pet.  The owner explained that she “just couldn’t deal with them any longer!”

Kate had some food aggression with other dogs, even though she would let a human reach down while she was eating and remove her food bowl with no problems.  She also had a small growth that was hardly noticeable unless you looked very closely at her front upper gums.  WRSE took Kate to the vet for her exam, tests and then had her altered.  The vet didn’t think the little growth was anything to be concerned about and it certainly did not detract from Kate’s beautiful little face or cause her any discomfort.

Kate was almost adopted several times; however, her food aggression with other pets always seemed to rule her out with one family after another.  It was determined that Kate should be an only pet in order to give her a better chance at happiness in a forever home.   After five months, a wonderful home in South Carolina was found for Kate.  A retired couple with no other pets and no children in the home had seen Kate on Petfinder and contacted WRSE about her.  They drove to Nashville to meet Kate and she bonded with them immediately.  She had never been as calm as she was in her new Dad’s lap!

Kate had not returned to the vet because there had been no reason to.  She was in great health, had a great appetite and wasn’t due for any vaccinations for several months.  As with most new pet owners, Kate’s Mom and Dad took her to their vet for a little visit the week after they adopted her.  The news was not good.  Kate’s little growth on her upper front gums had spread quickly into the roof of her mouth and around the back of her front teeth and was very fast-growing and invasive.  Her new parents were falling more in love with her every day but were not up to the emotional or financial demands of what was now being called an aggressive tumor.  After less than a week of furever home bliss little Kate was coming back to WRSE.  We immediately had a wedge biopsy done before Kate left SC and thankfully it came back negative for cancer.  Once back in Nashville, Kate was seen by our vet and he referred her to a veterinary surgeon.

Thanks to WestieMed, we were able to have Kate’s fast-spreading, invasive mouth tumor removed.  The surgery also required six of her teeth to be removed, however, the surgeon was able to work around her K-9s (fang teeth).  Kate was an excellent patient, all of the massive tumors was removed and her surgeon feels that it will not return.

WRSE has had quite a few very sick dogs and dogs needing extensive surgery during this past year.  Our very young, although very active, rescue group was running on empty as far as funding for another expensive medical need.  Being able to turn to a very special group of people that have hearts full of love and helping hands when it comes to Westies was what WRSE and little Kate needed.   Thanks to this caring group of Westie lovers, Kate is on the road to complete recovery and will be looking over some new adoption applications in a couple of weeks!   Kate will soon be adopted and begin a very happy and healthy new life!  She will be able to do so because of the generosity of WestieMed.

Kate is living a wonderful life in Ohio.  She sends messages by e-mail!  It did not take her long to train her people.  She has told me of training her Dad to sit on the floor in front of the recliner when she is in the mood to really “stretch out” in their recliner!  Kate is very loving, and also very smart!

Hi… It’s Katie Thomas… apparently today is a holiday in Loveland, OH – it’s “Lucky Dog Day – 7/11”, which is great ‘cause it’s also one year ago today that I found “him and her”.  A lot has happened since then, almost all of it revolving around walks and belly-rubs and playing — I’ve been very busy. My people seem much happier than they did when I first met them… I take full credit for that, ‘cause as you see I have “Westietude”! So have a big bowl of nibbles on me to celebrate the holiday.

Love and thanks, Katie Thomas

Thanks so much to everyone at WestieMed for helping Katie and allowing her to move on to adoption.  Katie’s surgery was a huge success and she is now the center of her owner’s world!   She is loving every minute of it and her wonderful world was made possible by WestieMed generosity.   WestieMed Rocks!