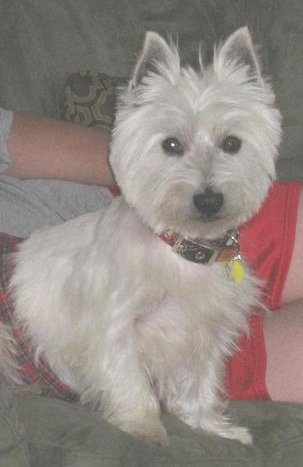 In mid-April, WRT received a call from our friends at Young-Williams Animal Shelter in Knoxville, TN that they had a sweet little male Westie that had been picked up as a stray and no one ever came looking for him.  Paddy was estimated to be about two years old.

Thankfully, they work with us and know to call us before putting one up for adoption to the general public.  We arranged to have one of our East TN volunteers pick him up and transport him to us in Middle TN.  We got a full vet report from the shelter vet (which is rare), along with two well-defined x-rays (which is even MORE rare that they would send those to us!), that identified a bad break in this little fella’s left rear leg.

We got him checked out again by our vet here in Franklin, and it was determined by her and by the orthopedic vet she uses that the break would cause little Paddy to lose his leg, if not corrected surgically quickly.  The break had not healed correctly and needed to be re-broken, the femur shaved down and reset correctly.  It was also identified by our vet that he suffered from a strain of Mange (thankfully not the contagious kind!), and he would need medicated dips every two weeks along, with two to three rounds of antibiotic (Baytril).  We are happy to report that his skin condition is improving, and thanks to WestieMed, he will soon resume his life has a rambunctious, happy little Westie boy that can “zoom” around a room or outside with his other terrier friends!

We look forward to giving you many wonderful updates and pictures of this exceptionally sweet boy!  Thank you again from the bottom of our Westie Rescue of Tennessee hearts!