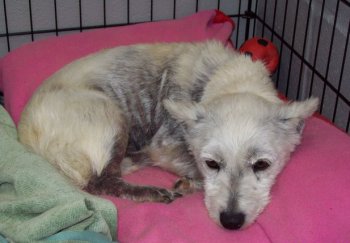 I had been friends with the local Humane Societies for several months as my two large ‘outside’ dogs, a golden Shepherd named Lucy and a black lab named Abby, went missing at the end of Jan 2011.  I checked the new pics on the local Humane Societies’ homepages regularly just hoping to find them and bring them home.  (We have since adopted a Collie mix from another local Humane Society.)  I saw “Patti’s” pitiful picture on their page early in the week, and on Friday when I took off from work to spend the day with my husband, I suggested we go by the Shelter and “just look” at the little Westie.  We did not need another dog since we also have a ten yr old Shih Tzu, Lil’ Dixie Darlin, inside the house!  When we arrived at the Shelter, they were delighted that we had come to see “Patti”.  The worker that had been taking care of her for several months met us at the gate and said that we were the only ones that had even looked twice at Patti.  Patti had a skin condition that the worker had been trying to treat within the Shelter’s means.  I was familiar that Westies could have skin problems if they were not taken care of;  I had done a lot of research about Westies after my daughter had gotten her sweet Westie, Bella, over a year and a half ago.  (I never knew Westies were so sweet until my daughter got hers!)  Patti’s skin had turned black over most of her body (reportedly due to neglect and the conditions that she was living in with her previous owner, who had surrendered her several months prior), and a lot of her hair had fallen out.  The efforts of this worker had definitely paid off because Patti’s hair had begun to grow back already.  Her skin looked thick similar to ‘elephant’ skin, especially on her legs.  The worker mentioned that her skin had a slight odor that probably indicated a yeast infection.   What hair she did have felt like dry straw unlike the soft hair of my daughter’s Westie.

We adopted Patti on Friday, May 20, 2011, not really sure what we had gotten ourselves into!  There was a great deal of dandruff on her blanket the next morning, and she had thrown up at least once.  Since we had some reservations about her skin condition as well as her health and exposing our other dogs to her, we took her to our Veterinarian for a physical on Saturday.  The doctor predicted that Patti was about two years old.  She examined her thoroughly, and prescribed Cephalexin capsules, antibiotic drops for her ears, and advised to give Benadryl for the itching.  She also recommended an anti-microbial shampoo which I already had at home.  By this time we had played around with several different names that would suit her better than Patti; we finally settled with the name “Peppi” since she answered it and was somewhat suitable to a Westie’s personality.

Her first two weeks with us were filled with good days and bad.  She would take her medicine really well for me, even her ear drops.  She threw up several more times in the first week, but not enough to worry too much since her appetite was still good.  She would be very active one day playing wide open, and the next she would be sluggish and just lay around.   One evening I found a large knot on the back of her head and was determined I would probably have to take her back to the vet the next day, but when I felt for the knot the next morning, amazingly it was gone!  By this time, I had gotten online to research about her skin condition.  I began to use Nizoral shampoo along with with the anti-microbial shampoo every four to five days.  It seemed to help soothe her skin and help with dandruff.  I also read about Westie success stories on the natural supplement, Skin-Eze.  I ordered a thirty day supply of the Skin-eze capsules to try.  The one thing that sold me on this natural supplement is the lack of side effects as opposed to some of the steroidal treatments.

We have had Peppi for a month now and we have seen a tremendous improvement in her skin and in the way she feels.  She has been on the Skin-Eze for about twenty-two days.  Her hair is gradually growing back, and the dandruff is gone.  She loves to play with my daughter’s Westie, Bella, when she comes to visit since they are about the same age.  We have to settle them down at times because they get to playing so roughly! My daughter has also fallen in love with her and recently volunteered to keep her in Oxford along with her Westie while I was gone for a week on a business trip.  She told me she was not sure if she would bring her home because she was so sweet!

I am very thankful for WestieMed and how they have provided the information and support to help me give Peppi the proper care.  I know there is not a quick fix for Peppi’s skin condition and hair loss, but WestieMed has fulfilled its mission one more time by helping to raise the quality of life for Peppi.  Her personality is not as bold and spirited as my daughter’s Westie, but she loves to get her ears scratched and her tummy rubbed.  She will nip at my hand if I stop petting her!  I am very proud to be the one to give her the love, care, and attention that she needs!  Thank you, WestieMed for being there!