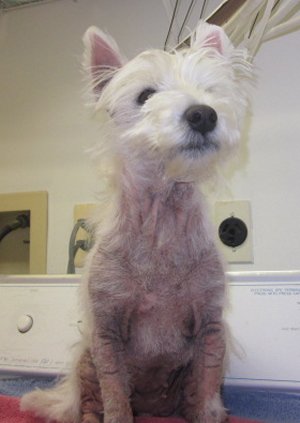 Bacall came into our lives quite unexpectedly.  I volunteer at the Baltimore Animal Shelter, BARCS.   In the past I have been able to resist the temptation of adopting every dog at the shelter, but not this time.

As I was walking past a room used for washing the dogs, I noticed a little Westie face peeking out from the towel as she was being dried.  Of course, I had to see her, and when the towel was removed, she was missing about 80% of her hair.  What hair she did have was matted and unkempt.  Bacall’s skin was elephant-like, inflamed, very dark, and had a yeasty smell.  Her former owner brought her to BARCS because of the cost of returning her to good health and the frustration of dealing with Malassezia.  She certainly didn’t look comfortable, and I told the office that I would be willing to foster her and help her get back on her feet.

BARCS generously gave me some medication for her and a bag of Z/D.  The following week I brought her back to BARCS for some routine booster shots and was told that it might be best to take her for some blood work.

This led us to Greater Annapolis Veterinary Hospital. Many Westies from Maryland Westie Rescue have passed through their doors, so the doctors are very familiar with Westies.  Dr.  Duane Woodburn put her on some medicine that brought her relief, and the blood work came back negative for kidney or liver disease.  We could almost see her condition improve from day to day and often would ask if it was possible to see such changes on a daily basis.

In the meantime, my wife and I decided that we would adopt her.  When you look at her sweet face with her big brown eyes what else could you do but adopt her?  She has a nice temperament and gets along well with our other Westie, Bogie.

Another week went by and suddenly Bacall stopped eating.  Up to this point, she had a great appetite, so this was very unusual.  However, about this same time she had been caught on top of the table finishing off my grandson’s lunch and later that evening helping herself to some more food from the garbage can.  So, it was back to the vet to see if she had eaten anything that was making her uncomfortable and causing her not to eat.  The x-rays only revealed a Westie with a very full stomach and intestinal tract.  However, during the course of that week, she continued to be plagued with various symptoms – shaking and not eating being most predominant.  After four additional trips to the vet, it was determined that some of the medicine she was taking was not agreeing with her, so two of the meds, Ketoconazole and an anti-biotic, were stopped.  She continues her treatment with Atopica and a spot on a treatment called Allerderm.   She also is bathed with Malaseb shampoo.  Presently, she continues to improve and is getting her “Westitude” back again.

All of this resulted in many doctor’s bills that were adding up quickly.  I knew about the work of WestieMed through the Westie Imprint and our Westie club, Chesapeake Bay Westie Club.  Thanks to the great people at WestieMed, our bills are getting paid and little Bacall is getting better.  We are so thankful that there is such an organization that is interested in helping rescued Westies.

Bacall continues to amaze us with her recovery from Malassezia.  It has been eight months since she started her medicines and has grown thick hair all over her body.  I have even had to trim her a little to keep her looking at her best.  She still takes a generic form of Atopica but on an every other day pattern with the hope that she can eventually take even less.  She does have an occasional bath with Malaseb shampoo.

In October she was losing a little hair under her eye and upper forelegs and since Ketoconazole doesn’t agree with her stomach, our vet prescribed  Mal-a-Ket Plus which is a spray.  That cleared everything up nicely.

She was in a Scottish Christmas Walk in Alexandria, Virginia and was joined by our other Westie, Bogie, along with about 80 Westies.  She loves to play with Bogie and it is great fun to watch her try to entice him to play.  We call her the social director.   It’s not uncommon to see Bogie and her guarding our front hall and loving anyone that walks through it.  She has a nice temperament and loves to cuddle on the sofa.

Thanks again to WestieMed for helping us get Bacall on the road to good health.