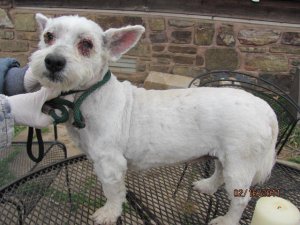 Seven years ago, I brought two little Westie puppies into my life: Max and Piper.  They have been such a joy for me and my family (grandpops loves his grand-dogs!), and I’ve always known I’d expand our family one day.  Because of my love for Westies, I check the Westie Rescue of Tennessee quite often to see the Westies they have for adoption, but the timing was just never right – and to be honest, WRT’s babies get adopted out very quickly.

However, back in early June, I came across a note on WRT’s Facebook page about a little blind Westie girl.  When I read the note, my heart just broke for this poor little girl that had obviously been left to fend for herself.  A farmer found her hiding under a shed on his farm.  Her hair was extremely long and matted, and she had severe scabbing around her eyes, as well as ear mites.  She was underweight and was in desperate need of some TLC – as well as medical help for her eyes.

She was brought to Nancy, a Westie breeder in Arkansas, who shared her story with WRT.  Nancy provided her shelter, food, and medical care, but the goal was to find her a furever home where she would feel loved and protected.

After I read the story, I knew Ellie had to come home to Alabama and become part of my Westie family.  I looked up from my laptop and asked Max & Piper (yes, I asked the kids!) if they wanted a new sister…?  Max’s ears perked up and he ran over to the toy basket and picked up one of his favorite toys – a little pink elephant that I call Ellie.  Well, that was enough of a sign for me.  I had always said my next girl dog would be named Zoe or Ellie, and Max bringing me that toy just sealed the deal!  Thanks to some wonderful volunteers (Nancy, Patti Holden, and Carol Utley), we were able to get Ellie to her new home on 6/25.  Little did I know what I was in for!

Ellie came in and instantly peed on the floor! I thought, “Oh no! I’ve been living with two dogs for seven years that are housebroken – what am I going to do?!” I just went back to what worked with my two little ones, and before I knew it – just two weeks later – Ellie was housebroken and I no longer had kept her in her pen (it was a nice large area), if I left for an extended period of time.  She was using the doggie door like Max and Piper and using the outdoor potty pad if I had to be gone longer than normal.

She has very quickly learned how comfy the sofa is, and after only a couple of days, she learned to use the doggie steps to get up on the sofa and the bed.  She still sleeps in her crate at night because I’m worried she might fall off of the bed, but she loves her little “house” at night – especially the down pillow she sleeps on!  She has her favorite treats and, after prying them away from Max, has found 2 favorite toys – a pink piggy and a pink “diva dog” purse.

My biggest concern with Ellie was her eyes, of course.  Although I had been given an antibiotic eye ointment to use on her eyes (the vet had given Nancy a sample before she was brought to Alabama), her eyes would still get mucky and crusty.  Another wonderful Wesite supporter, Diane Vann, pointed me in the direction of Veterinary Eye Specialist in Birmingham (and also WestieMed).

I assumed they would tell me the worst – that Ellie had cataracts or had no sight and would never see.  But instead, they told me wonderful news!  While Ellie’s sight would never be 100% and her extreme dry eye condition was permanent and ulcers had formed on one of her eyes, she should get some sight back in both eyes!

I was so excited, but since I am currently out of work, I was worried about paying for her eye drops and vet visits each month.  Thank you WestieMed for alleviating this financial burden for the next year!  Believe it or not, after only a week of using the special eye drops, Ellie’s eyes are already improving.  They look normal, not quite as bright and shiny as I want, but there is no muckiness or crusting.

She may have to have these drops for the rest of her life, but I don’t care!  I would do anything for this little Westie/St Bernard (she gives some very sloppy St Bernard type kisses!).  So here we are now, one big happy Westie family!  I am amazed every day at how well Ellie does with such little sight.  And while I know Ellie is thankful to have a home and forever furr-friends, I am even more thankful for the love and joy she brings me every day!

I just wanted to give you an update on our little Ellie!  She is doing great!

She has been on special eye drops for the dryness and Terramycin for infection.  Her tear ducts are producing tears, but she’ll probably be on the meds for life.  As far as any sight regained, I know that she seems more sensitive to light, but time will tell with that.  Her little eyelids are funny, b/c the lashes grow in too think so I trim them weekly so I can see her great big beautiful brown eyes – which are shiny and rarely have any crusting or “gooping”.  I don’t know how she does it, but she loves all of the pink toys we have – she has her own little set and has to have at least one to go to bed with at night – piggy, Ele the elephant, the pink princess purse, and, our newest, monk-monk – our pink monkey.  I bought one in blue and one in pink and she totally ignores the blue one.

She loves her little crate at night.  I just say, Ellie, it’s time to go nite-nite, and I’ll have one her toy waiting for her and she’ll grab it out of my hand and head straight into her down-filled little house.  The next day, she always goes back and gets whichever ever animal she took to bed.  While I’d love to have the crate out of my room, I don’t think I will ever let Ellie in the bed like Max and Piper.  I’m too scared she’ll fall off.  Plus, three dogs in the bed?? I don’t know.  They may take over completely if I do that!

She is in treat Heaven, and she knows when I’m cooking their dinner –she runs around and around the kitchen until it finally hits the bowl.

She’s even learning the art of playtime with Max & Piper.  I think it scared her at first, but now she just plays along.

All-in-all, we are one big happy Westie family! Thank you WestieMed for your support!!

Ellie is doing great!  She still has to continue to get eye drops every day, but her sight has actually improved.

Being out of work (Still!), WestieMed’s help was invaluable!

Thank you again so much!