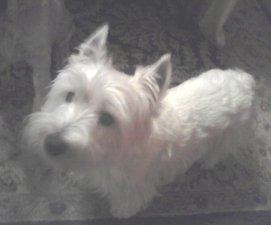 George Carlin said “Life…is a series of dogs. It’s true! You just keep getting a new dog.”  Wally is our latest arrival in a long line of rescued dogs of many breeds, one Collie Lucky, two Irish Setters Clover & Lexi, one Lhaso Apso, Raggs, one Golden Retriever mix Goldie, one Airedale, Harry, a Shephard mix, Ralphie, a Black & White English Setter, Mya and currently we have Mollie, an orange and cream English Setter and Maggie, an English Cocker Spaniel. I added this information to show you that most of our dogs have been large in the frame. We had stayed away from smaller dogs fearing their dispositions…well, Wally has totally disproved that notion.

After a long search including ads posted for a Westie online, I came across Westie Rescue of Alabama and worked with Phyllis, an absolute champion for rescued dogs. She told me wonderful things about a little nineteen-pound male Westie by the name of Wally aka ‘Little Man’ as she also called him respectfully  Seemed he was about as well adjusted a Westie as one could adopt. Seems he had been surrendered from a loving home in Florida, then stayed in Alabama for two months with the rescue for testing and observation before adoption, then he was driven northeast to Tiverton, RI arriving late one night on 3/31/11. These two brave scouts had driven near straight through, twenty hours, to get my ‘dog’ to me.  Note: Due to recent surgery, I was unable to drive out halfway. The minute he pranced across our kitchen floor, I could not believe my eyes, as the little white dog that I had longed for so long had arrived. With his walk, he showed that he thought himself to be a much bigger dog. He went right over and greeted our other two dogs, Maggie, our six-year-old English Cocker Spaniel, alpha girl, and Mollie, our seven-year-old English Setter, a sweet & mellow long-suffering lass.  The room was filled with all shapes and sizes of dogs sniffing and wagging, no growling…just friendly acquaintancing. I know I must have been beaming from ear to ear, my hubby was so pleased to see full joy return to my face. (As in October 2010, we lost our sweetheart dog, Mya…she was the spark plug of love & life that was sorely missed.  Since her passing the two other dogs seemed to sleep most of the day, no more pig piles of dogs, speed chases, nothing).

Well, one could see in an instant that Wally was a gleeful lad who seems to feel at home here and wanted to play and be played with. Wally’s big black eyes take you away, you melt just looking at him. He’s charming, and loves to play teasing games with us, i.e., ball and ”’wormie”. It wasn’t long that all three dogs were running, jumping, playing tag, and yes, even playing pig pile with Mollie on the bottom as usual.  Wally rounds out our dog family…he’s the spark we all needed to have in so many ways.

Shortly after Wally arrived, we noticed a few spots of blood before he urinated we attributed it to the dogs’ horseplay as it only was observed that once only.

Then after a professional grooming, Wally developed circular patches on his abdomen that he would scratch. The vet diagnosed this as dermatitis and prescribed a one-time dose of steroid IM as well as an antibiotic. He examined him thoroughly. The next morning, we noticed twenty or so drops of frank red blood (from his penis) before he urinated. the vet advised that he felt that this had nothing to do with his examination but that he probably had bladder stones & to bring him in for an x-ray.

The x-ray showed an empty bladder with stones, large and small – the concern more for the smaller stones obstructing urine flow. Phyllis directed me to notify WestieMed. I sent off an email detailing our situation and the urgent need for help. I  received a call from Bette within hours who reassured me that WestieMed would be there for us and asked if surgery could be scheduled sooner i.e., tomorrow versus the scheduled date of 8/1, etc. Bette had such a calming reassuring voice and manner to her. The call was surreal. I could hardly believe what I had heard as this news was all too wonderful to hear.

The next five days before surgery were long and difficult for us to watch Wally suffer through. At times, he bled twenty to thirty drops of blood before urinating, both inside and outside the house, straining so long to try to get some relief. He was so concerned with his ‘accidents’. He would try to get to the blood before we did, he would lick at it. He also tried to clean anything that was soiled, such a fantastic little guy.

Wally had surgery on 8/1 as scheduled. The surgery went well yet because two sharp-edged stones had embedded into the top of his urethra, he required a catheter and an overnight stay. I was reassured that he would be medicated for pain and sedated slightly. Well, come the next morning dear Wally had had enough, he pulled out the catheter himself and was cleared for discharge.

Homecoming was quiet but joyous!!! Just to have our Wally, our Little Man, back is everything.  His recovery has been uneventful thankfully. All systems seem to be working well. The sutures remain intact with unchanged fullness, swelling around them and he returns for a recheck with suture removal in ten days.

Thank you, WestieMed, for all your immense assistance and help with our treasured West Highland Terrier, Wally.  We marvel at his intelligence, youthful spirit, playfulness & energy. We will keep you updated on his progress, health, and adventures.